FOLLOWING the proposal made by the Federal Government on the implementation of the key demands of the Academic Staff Union of Universities (ASUU), the Nigerian students have appealed to the lecturers to sheathe their swords and reopen schools for academic activities to commence.

President of the National Association of Nigerian Students (NANS), Comrade Aruna Kadiri, made the call on Wednesday while addressing newsmen on some national issues in Abuja.

He equally called on Nigerians to partner with the police in order to effectively reduce the crime and criminality in the society.

He said the students were concerned about the image of the police, saying the trending Senator Isah Hamma’s allegation that the Inspector General of Police, makes a whooping N120 billion every year through the provision of special security to some agencies without proper investigation was not healthy for the reputation of the police hierarchy in the country.

He, however, said the leadership of NANS would further meet with some officials of ASUU before the end of this week in order to prevail on the lecturers to quickly call off the strike, saying the students were already tired of staying at home.

The Federal government had on Friday last week agreed to release the sum of N220 billion not later than October 2017, to the universities as part of the revitalisation fund being demanded by Union.

Minister of Labour and Employment, Senator Chris Ngige, who announced this after long hours of meeting with ASUU leadership, said fund when released is expected to go into the revitalization of federal universities across the country.

According to the Minister of Labour, the closed-door meeting also discussed how to set up the National Universities Pension Commission, while the issues of fractional salaries and Academic Earned Allowances were being addressed.

“We also discussed the issue of university staff schools and treasury single account with a view to finding how the system could accommodate funds for research grants that need to be independent from the government.

“We also discussed the issue of how the Federal Government could be involved in the running of state universities,” Ngige said.

The NANS President, said the students were glad that the leadership of ASUU at the meeting with the Federal government accepted the proposal and agreed to reverse back to the government within one week after meeting with its members.

Kadiri said: “We are not resting on our oars until the strike is called off. We earlier gave both parties two weeks ultimatum within which the resolve the impasse. This yielded positive result at the Federal government assured us that the they would not wait for the two weeks to elapse before the crisis was resolved.

“We, therefore, call on the ASUU to consider the proposal and in the interest of the suffering Nigerian students, call off the strike for students to resume academic activities. We will meet with the leadership of ASUU before the end of this week and we are hopeful that the strike will be called off soon,” he said.

We’ll Not Enact Law That Will Stifle Freedom Of Worship In...

Why I Prefer Married Men To Regular Boyfriends — BBNaija Tacha 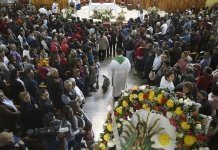