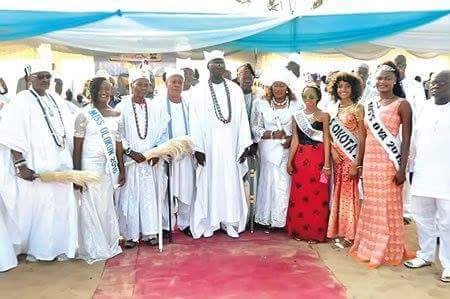 THE need for Nigeria to retrace itself to the original system of government at the inception of independence formed the fulcrum of discussion at the Yoruba Broadcasters Festival which held in Osogbo, Osun State capital today.

Guest Speaker at the occasion, Otunba Gani Adams, held spectators spellbound as he took them through the intricacies of tradition as it affects the Yoruba as well as panaceas to the labyrinth of quagmires militating against Nigeria as a nation.

According to Adams, true federalism and the need to allow for regionalism that would pave the way for ethnic nationalities to develop at their own pace is the way to keep pace with the world in socio-political and economic development that has long evaded the country.

Adams who was at the last National Conference organized by the last administration of President Goodluck Jonathan said President Mohammadu Buhari would have saved the country from the lingering economic woes in the country if he had implemented the resolutions of the conference.

To him, the country would be difficult to revive if the leaders continue in their habit if placing self-interest above national interest.

“Development will start coming our way the day we decide to empower the regions above the center. We need to go back to regionalism where every region are given the encouragement to develop at their own pace.

“I am saying this because of the Yoruba race, as well as the two other major tribes that dominate Nigeria, benefitted much from this, during our first democratic experience. The groundnut pyramid of the north, as well as the textile industry, was booming in the north while the West capitalized on their rich soil to produce cocoa and other cash crops to world admiration,” he said.

ALSO READ:  Some Beneficiaries In Kwara Got N450m From Alison-Madueke As Bribe – EFCC

Adams noted that despite the independence that came late with the rife struggle that midwived it, the Yoruba were making some landmark  progress that put them in the fore front of world leading developing nations.

“From the proceeds from cocoa products, Late Pa Obafemi Awolowo was able to give free education to the people of the west. He established the first television station in Ibadan the same year, and even before France. He built a 24 story building which record, no government has been able to break in Nigeria, to date,” he stressed.

Adams, who is the National Coordinator of Oodua Peoples Congress, OPC, also took participants through the gamut of mineral and tourism endowments of the Yoruba, which the lingering lopsided federal system has disallowed to flourish as a result of the huge dependence on oil and its hydra-headed mono-economic woes.

“While other nations are building their tourism potentials and using the gains to advance their countries, our leaders have concentrated on money coming from oil explorations alone and close their eyes to other revenue-driving sectors, “he said.

He enjoined the government to as a matter of urgency, look into the recommendations of the last confab with a view to addressing those that can ameliorate the current situation of the country, for the good of the people
National Coordinator of Oodua Peoples Congress, OPC, Otunba Gani Adams, storms Osun State today, to deliver a lecture at the 2016 Yoruba Broadcasting Festival, holding in Oshogbo.

The festival, put together by the Yoruba speaking broadcasters in Osun presents the OPC leader to deliver a speech as a way of further boosting the Yoruba culture as well as endear the culture of the race into the hears of indigenes of the state.

The 2016 festival with the theme, ‘Nibo ni Yoruba Nlo,’ features Adams as guest speaker at the event which will also host the Ooni of Ife, Oba Adeyeye Ogunwusi and the Oniwo of Iwo, Oba Dr Abdulrasheed Akanbi, as royal fathers of the day.

Forget About Winning Again In 2019 —Fayose