NIGERIA retained her previous 52nd position in the world and seventh in Africa in the March FIFA/Coca Cola World rankings released on Thursday.

Nigeria had 609 points, two points below Cameroon that is 51st in the world.

The top five is unaltered, with Germany still on top, while Poland that will be up against the Super Eagles in a friendly are the only movers in the top 20, having climbed into joint-sixth position alongside Spain.

Tunisia remains the top African country on 23rd position, followed by Senegal on 27th and DR Congo on 39th.

The Super Eagles World Cup Group D foes Argentina is on 4th place, Croatia on 15th and Iceland on 18th.

The next edition of the rankings will be released on April 12. 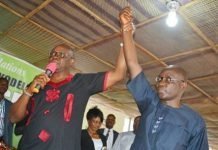