TIRED of negative coverage, US President Donald Trump hinted Wednesday that he was ready to take his battles with the news media a step further by revoking journalists’ credentials.

“The Fake News is working overtime. Just reported that, despite the tremendous success we are having with the economy & all things else, 91% of the Network News about me is negative (Fake),” Trump tweeted.

“Why do we work so hard in working with the media when it is corrupt? Take away credentials?”

Journalists are required to obtain and present press credentials in order to enter and report from the White House, government agencies, Congress and the Supreme Court.

Since taking up the presidency, Trump has strongly favored news outlets that provide glowing coverage such as Fox News, the Daily Caller, Newsmax and Sinclair, a group of almost 200 local TV stations.

He routinely attacks the news media as “dishonest” and brands critical media outlets and reports as “fake news.”

For the second year in a row, he skipped the prestigious White House Correspondents’ Dinner, an event traditionally attended by the American president. 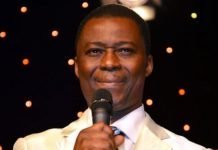 Naira Falls To 414 Per Dollar