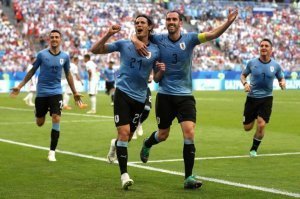 Russia’s impressive start to the World Cup took a downward turn as they had a man sent off and were easily defeated by Uruguay. It got worse for Stanislav Cherchesov’s side when a Diego Laxalt effort from 25 yards was deflected in by Denis Cheryshev, leaving his keeper Igor Akifneev stranded and in the position of having conceded three goals at the tournament without making a save.

Akinfeev did then come out to block a Rodrigo Bentancur chance, with Roman Zobnin just scrambling the rebound clear of Edinson Cavani, before Igor Smolnikov picked up a second yellow card and was sent off 35 minutes into his World Cup debut.

After the break, Russia’s 10 men composed themselves and at least managed to wrest back some control of the match, with Uruguay always looking dangerous but perhaps happy to concede possession and protect their lead. But the final word was left to Cavani, who put several earlier misses behind him to get his first goal of the tournament by stabbing in from close range after an Akinfeev parry. 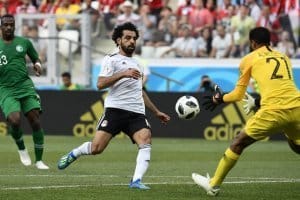 Saudi Arabia rallied from behind to beat Egypt 2-1 in their last group stage match. Mohammed Salah opened the scoring for the Egyptians in the 22 minute with a fine chip. Saudi Arabia had the chance to draw level from the spot in the 41 minute after Egypt’s Ahmed Fathy handled the ball in the box. Elhadary produced a stunning save, diving to his right to get strong hands on the spot-kick, pushing the ball onto the crossbar and preserving Egypt’s 1-0 lead.

Saudi Arabia levelled the scores 2 minutes into stoppage time after Ali Gabr brought down Fahad Al Muwallad in the penalty box. This time, Saudi Arabia made no mistake, with Salman Al Faraj calming converting to make the scores 1-1.

The second half was a balanced affair, as each side tried to get the winning goal in the maiden encounter. It was Saudi Arabia who broke the deadlock, with Salem Al Dawsari scoring in stoppage time to gift Saudi Arabia the win. 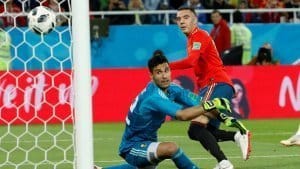 Video Assisted Refereeing came to the center of controversy in the match between Spain and Morocco. Youssef En-Nesyri thought he had given the African side a memorable win over their fancy European neighbors but Iago Aspas scored a late controversial goal to ensure the match ended 2-2.

The linesman had raised his flag for Aspas’ goal but a review from VAR showed that the former Liverpool striker was onside. The point means that Spain, who were on the verge of elimination finished group A as leaders after Portugal conceded a late goal to draw with Iran. Spain will now face hosts Russia who finished second in group A as Cristiano Ronaldo and Portugal face South American giants Uruguay.

ALSO READ:  I Was In PDP Before But Not Now, God Forbid –Obasanjo

Khalid Boutaib gave Morocco a surprise lead against Spain with a beautiful finish in the 14th minute after some schoolboy errors from Iniesta and Sergio Ramos in the half way line. But the lead was short-lived as Isco restored parity five minutes later with a volley. Iniesta turned from Villain to hero as he set up the goal after exchanging passes with Diego Costa.

Ricardo Quaresma’s lovely strike just before halftime and Karim Ansarifard’s injury time penalty were enough to share the spoils between Iran and Portugal in their final Group B World Cup match played at the Mordovia Arena in Russia. Quaresma struck on 45 minutes to give Portugal the lead when the Iranians were looking to go into the half time break at par. Iran, coached by former Portugal and Real Madrid Coach, Carlos Queiroz created a few anxious moments – including an ignored penalty appeal – for the the Selecção das Quinas but could not make it count. Not until a late penalty ruled by VAR offered Iran a lifeline in injury time.

Cristiano Ronaldo missed a penalty early in the second half and would have rued it had Mehdi Taremi not hit the side-netting in the closing seconds of the game in a game full of VAR controversy. The result means Portugal go through to the round of 16 in second place behind Spain, but on the same 5 points.

An 11-year-old Nigerian boy went viral this summer when millions of people watched a video of him dancing ballet barefoot...

The President Muhammadu Buhari-led Federal Government has been strongly admonished to jettison the idea of resuscitating any ‘national carrier’ in...