SELF-ACCLAIMED Nigerian barbie, Bobrisky was recently denied entry into the United Kingdom where he was scheduled to hold a birthday party and have a meet and greet event with some of his fans.

On arrival at the Heathrow airport in London, the cross dresser was held at a detention camp and subsequently put on a return flight back to Lagos. It was gathered that Bobrisky was denied entry into London because his visa doesn’t permit him to work in the country as he was poised to make money through his appearances during his visit to the country. 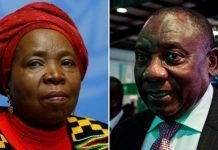