ENGINEER Seyi Makinde has emerged the flagbearer of the Peoples Democratic Party (PDP) in Oyo State.

Makinde emerged after winning the governorship primary election of the party, held at the Liberty Stadium in Ibadan.

A total of 145 votes were voided during the Sunday’s PDP governorship primary election.

This was just as Mr Adebayo Adelabu emerged the Oyo State gubernatorial candidate of the ruling All Progressives Congress (APC). 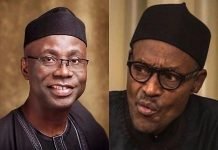