THE Peoples Democratic Party (PDP) has alerted of moves by those it has identified as certain agents of the Muhammadu Buhari Presidency to bribe Senators of the All Progressives Congress (APC) extraction to protect embattled President Buhari from imminent parliamentary sanctions for constitutional breaches and gross misconduct.

The main opposition party said it is in possession of intelligence that shows that this is the reason the “jittery” Presidency had summoned all APC senators to the Presidential Villa to a clandestine meeting on Monday night, ahead of the Senate’s resumption on Tuesday.

In a statement issued in Abuja on Sunday by Kola Ologbondiyan, National Publicity Secretary and Director, Media & Publicity PDP Presidential Campaign Organisation, said the PDP has been informed of how the Buhari Presidency has been unsettled following national and international outcry over his constitutional breaches, particularly the assault on the judiciary in his attempt to forcefully remove the Chief Justice of Nigeria (CJN), Justice Walter Onnoghen and impose a pliable CJN to do his bidding.

It added: “President Buhari is not only apprehensive that the Senate might sanction him for violating the constitution and usurping its statutory duties regarding the handling of issues related to a CJN, the parliament might also open an inquest into how President Buhari, who parades himself as Mr Integrity, allegedly procured an order from the Code of Conduct Tribunal (CCT) upon which he announced the illegal suspension of the CJN.

“There are reports that the said order is suspicious and subject to investigation, being not argued or issued in the open court; following which a distressed Buhari Presidency now seeks to corrupt and undermine the Senate.”

The party said that it has been made aware of how money has been moved from the coffers of the Niger Delta Development Commission (NDDC) to bribe the APC senators, as well as how each APC senator has been offered huge sums of money in foreign currency to engage in heckling during the session, particularly when the matter is raised.

The party said it wants the APC senators to note that the issue at hand “is not partisan; it is not even about Justice Walter Onnoghen, but about nationhood, as well as the protection of our democracy and constitution from despotism.

“The Buhari Presidency is bent on corrupting our democratic institutions but Nigerians are watching the action of our lawmakers at this critical time.”

In a related development, the Coalition of United Political Parties (CUPP) has also warned of a fresh plot allegedly by the Buhari Presidency to a violent take over of the leadership of the National Assembly.

According to a statement issued by its national spokesman, Ikenga Ugochinyere in Abuja on Sunday, the coalition has received incontrovertible facts on the plot which it said already has the blessing of the President.

The statement said the “violent, undemocratic, unlawful, illegal and demonic takeover” of the leadership of both Chambers of the National Assembly is planned for Tuesday.

The statement said: “The APC led Federal government are of the firm belief that Tuesday is their best and last chance to effect the changes as their control of the judiciary will be put to use to ensure there is no reversal of justice for the present occupants.”

According to the CUPP, “the APC is ready to do whatever and destroy the very fulcrum of our constitutional democracy on Tuesday and have vowed, it is tomorrow or never.

“The judicial coup which they believed was supposed to be more difficult went very easily beyond their imagination hence the need to complete the takeover of the National Assembly immediately so that the distraction of the election campaigns will be put to use.

“They have also resolved that the government will make some big positive announcements tomorrow being Monday, 28th January so as to deflect the minds of Nigerians.

“(Vice President) Prof. Yemi Osinbajo, Chibuike Amaechi and Babatunde Fashola have been saddled with the responsibility of choosing the issue for the announcement by the government.

“The plot will see the criminal announcement of Sen. Ahmed Lawan as the Senate President, Sen. Hope Uzodimma as the Deputy Senate President and Sen. Godswill Akpabio as the Senate Leader. While in the House of Representatives, Hon Gbajabiamila will be announced as the Speaker of the House and Hon Abdulmimin Jibril will be announced as the Deputy Speaker.

“The decision on who will be the House leader will be resolved by the trio of Bola Tinubu, Adams Oshiomhole and Sen. Gorge Akume.”

The coalition alleged that “the arrowheads of this treasonable plot in the National Assembly include Sen. Ovie Omo-Agege, Sen. Abdullahi Adamu, Ali Ndume, George Akume and Kabiru Gaya. While the members of the House who are part of this plot to destroy democracy include Hon Femi Gbajabiamila, Hon. Abdulmimin Jubril and Hon. Agbonayima.”

It also alleged that the federal government has raised money in foreign currency from various government agencies for disbursement to key actors to implement the plot.

It further said: “Nigerians are hereby put on notice that these coupists are plotting that Sen. Saraki, the Senate President, Sen Ike Ekweremmadu the Deputy Senate President, Sen. Ben Bruce and Sen. Dino Melaye, Biodun Olujimi, Hon. Dogara, Kingsley Chinda, Nnena Ukeje among others would be stopped by security agents from gaining entrance into the National Assembly.

“Thugs have been mobilized from Plateau, Kwara and Kogi to mount a protest at the gates of the National assembly and have the approval to attack and disperse any group that comes to hold a counter rally.”

CUPP, therefore, urged Nigerians to be vigilant and not allow the country’s democracy to be destroyed by “buccaneers.” 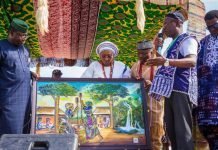