SENATOR Ahmad Lawan, representing Yobe North, has been elected as Senate President. Lawan defeated Senator Ali-Ndume with 79 votes, out of the total of 107 votes cast.

Lawan was immediately sworn in by the CNA after taking the oath of allegiance and that of office.

Prior to the announcement, there was palpable tension and fear as Senators-elect commenced voting for either the Senate Leader in the 8th, Senator Ahmad Lawan, APC, Yobe North or the former Senate Leader and a strong contender for the position of Senate President for the 9th Senate, Senator Ali Ndume, APC, Borno South.

There was palpable fear in the Hallowed Chamber as the voting commenced, apparently due to the fact that the move to use the open ballot system as being canvassed for by the Senator Lawan led group did not sail through.

The Senators- elect are using the open Secret ballot system where they are given a ballot paper, go to the cubicle to vote secretly for their preferred candidates and then drop it in the ballot box. 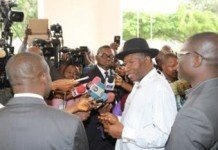 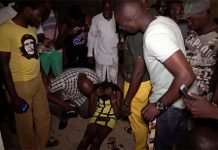