In a statement released on Monday on his Instagram handle, he said the move was due to the advice of his mentors.

Fatoyinbo who had been in the news since Friday was accused by Busola Dakolo, a celebrity photographer and wife of Timi Dakolo, Nigerian musician, of raping her when she was almost 17.

He, however, denied the allegations stressing that he had never raped anyone before, ‘not even as an unbeliever’

“I have taken time to pray and seek spiritual counsel from Christian leaders around the world who feel very concerned about the ongoing reports in the media,” the statement read.

“I have solicited their guidance on actions I should take that is honouring to our Lord Jesus Christ and the work he has called me to do.

“Drawing from their counsel and that of the leadership of Commonwealth of Zion Assembly and owing to my love for God’s work and the sacred honour of my calling, I have decided to take a leave of absence from the pulpit of the church.

“This step enables me to submit to the concerns of my spiritual mentors as they consider all the issues that have been raised against me.

“Though I do not understand all that is happening, I trust the Lord to lead and guide me one step at a time.”

“We will also not stand for false criminal allegations made against me or the church. The leadership of the Church and l have briefed our lawyers to commence Criminal and Civil actions against all individuals making such false allegations whether directly or by proxies.

“We will as a church pursue every measure within the ambits of the law to bring the culprits to justice.

“We have heard and we will not be surprised to see more of such allegations by people who have been paid to continue in this line of blackmail, harassment and extortion including those who may have been dismissed from their duties in the church on disciplinary grounds,” he said. 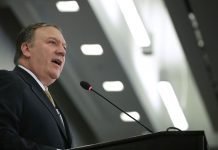 CAN Hails US’s Placement Of Nigeria On Special Watch List

Why I Developed Tourism Assets Of Cross River —Donald Duke