More than 300 persons, mostly children, were found chained in a building and rescued, the police in Kaduna State said on Friday.

The police said the building housed an Islamic school and that seven teachers in the school have been arrested. Two of the children were from Burkina Faso, according to the police.

” The state government is currently providing food to the children who are between the ages of five and above,” said Yakubu Sabo, the Kaduna police spokesman.

“We have identified two of the children to have come from Burkina Faso, while most of them were brought by their parents from across mostly northern Nigerian states.” 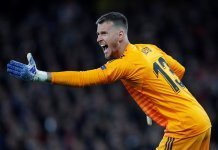