Akeredolu had frown over the remand of the monarch over a kingship tussle between him and Micah Ajijo in Ayetoro, a theocratic community in Ilaje Local Council of the state.

Oba Ojagbohunmi, alongside the Baba Ijo and Public Relations Officer of the community, Mr Lawrence Lemamu and Mr Victor Akinluwa were hoodwinked to Akure by the police and detained nine months ago.

The Supreme Council of Elders and Ayetoro Youth Congress (AYC), yesterday, jointly expressed the gratitude of the people towards the kind gesture of the governor to promptly intervene in the matter.

They thanked him “for his timely intervention towards the release of our people who were before now, unlawfully arrested and remanded at the Olokuta Medium Prison.

Most Rev. Apostle Joshua Bankole, who spoke on behalf of the council and the entire community, declared unflinching support for Akeredolu’s government and his future endeavours politically.

“We also seize this medium to tell the governor that Ayetoro, being the most populous community in Ilaje Local Council and her people, would always be in support of the governor in all of his political dealings and we ask him to continue the good works that he has been doing in Ondo State since he came to power,” he said.

Bankole hailed the governor for his relentless efforts to curtail the sea incursions “and also reminded him that the devastation of the sea encroachment is high: it has destroyed hundreds of thousands of houses and property. “We, therefore, humbly call on the governor to come to our rescue as Ayetoro is at the verge of being submerged by the Atlantic Ocean.” 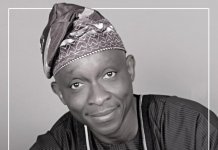