…Says ENL Consortium Must Deliver Project By May 2020

The Governor of Oyo State, Engineer Seyi Makinde, has rescinded a stop-work order he earlier issued on the Ibadan Circular Road project.

The Governor, in issuing the fresh order, said that the decision came after a review meeting held between officials of the state government and the ENL Consortium.

He has, therefore, given a May 2020 deadline to the company to deliver the project in line with the original three-year contract.

A statement by the Chief Press Secretary to Governor Makinde, Mr. Taiwo Adisa, quoted the Governor as saying that despite the fact that the first instinct would have been to revoke the contract based on the inexplicable slow pace of work and a number of identifiable irregularities, he would want the company to deliver the contract in line with the original contract they signed in 2017.

The statement cautioned political interests who are jumping into the fray of arguments on the 32-kilometre road contract to desist from playing to the gallery just in an attempt to get counted as ‘opposition voices.’

“Opposition in a democracy is meant to be constructive and reasonable and not a set of characters that defend underhand dealings and shady activities.

“A number of issues don’t look straight on the Ibadan Circular Road Project, ranging from the cost of the contract to the capacity of the consortium and eventual value for money realities.

“It is preposterous for any political party or group to jump at such a critical issue without being abreast of the facts of the matter and by merely trying to play to the card of unbridled opposition.

ALSO READ:  Who Is Joseph Tegbe?

“Governor Seyi Makinde has, therefore, given the ENL Consortium, the go-ahead to complete the project by May 2020 as specified in the contractual agreement it signed with Oyo State Government,” the statement read.

The decision to rescind the stop work order came on the heels of a follow-up meeting at the State Secretariat, Agodi, Ibadan shortly after the Governor conducted an inspection tour of the project.

The statement further read: “The Ibadan Circular Project is a 32-kilometre road contract awarded by the immediate past administration under a Build Operate and Transfer concessionaire arrangement at the cost of N67 billion.

“However, discoveries by the incumbent administration in Oyo State have confirmed that besides the extremely slow pace of work on the contract which meant that only 5.5 percent of work had been done in two and a half years, sections of the cost quoted may be apparently unjustifiable.

“For instance, documents at the disposal of Oyo State Government indicate that the ENL Consortium originally quoted N14 billion as the contract sum, whereas the former government went ahead to sign the contract at N67 billion.

“Again, the sum of 11 billion is being quoted for clearance of the bush on the 32-kilometre stretch of the road, while the same consortium is claiming to have spent the sum of N5 billion on some four or five culverts.

“Governor Makinde considers the project to be very strategic to the economic expansion agenda of his Government, and therefore ordered that since the consortium now claims to now have the required funding, they could as well deliver the project by May 2020, in line with the contract they signed in 2017.

“The decision to allow the consortium run out its contract through was informed by the need not to plunge the State into needless legal battles and thereby cause encumbrances that can hinder the development of the State.

“The State government is ready to hold ENL Consortium to its words and the dictates of the contractual agreement on the road. It is expected that the Consortium would put in place all things necessary to ensure it delivers on the terms of the all-important contract.” 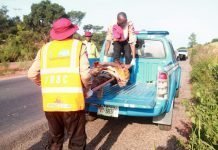