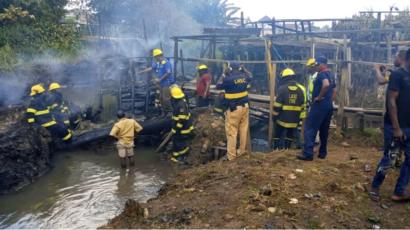 A pipeline belonging to the Nigerian National Petroleum Corporation (NNPC) exploded in the Oke-Ode area of Abule-Egba, Lagos State on Sunday evening.

Two yet-to-be-identified persons lost their lives while scores were injured in the incident.

It was gathered that the suspected cause of the fire incident was due to the activities of vandals, who allegedly ruptured the NNPC pipeline in a bid to steal fuel.

As of the time of filing this report, the estimated value of the properties burnt in the fire incident could not be ascertained.

The Director-General, Lagos State Emergency Management Agency, Dr Oluwafemi Okeosanyintolu, who confirmed the incident, said, “There is a fire incident at Oke-Odo. We are already coordinating.”

Also, the Director-General, Lagos State Fire Service, Magret Adeseye, said three fire service stations had been deployed in the area to curtail the fire, adding that no casualty had been recorded.