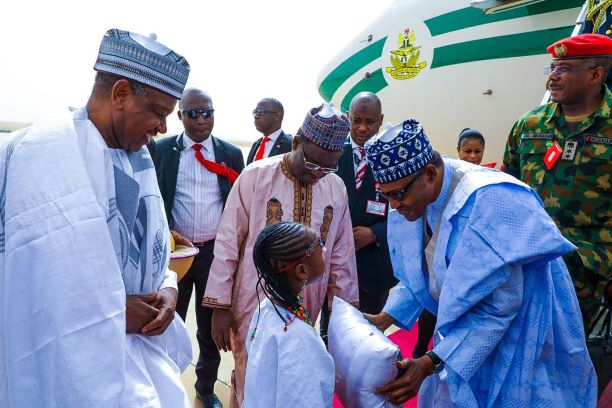 President Muhammadu Buhari has pledged to continue to support cultural festivals to unite and promote the heritage of the people in the country.

The President, who stated this on Thursday at the Agriculture shows in the ongoing Argungu International Fishing and Cultural Festival 2020 in Argungu, Kebbi State expressed his pleasure towards the performances of the local farmers.

While expressing optimism that Nigerians could grow what they will eat, President Buhari emphasised that his administration would continue to support farmers with soft credits and other incentives.

He noted that the returned of Argungu Fishing Festival after 10 years break shown the remarkable achievements of his administration in the restoration of security and peace across the country.

The President then assured Nigerians that the problems facing the country Nigeria are surmountable if all Nigerians put in their best.

He said:” When we Nigerians put in our best, we can solve our problems. The returned of this festival which is part of our achievement to ensure security across the country”.

Meanwhile, Kebbi State Governor, Abubakar Atiku Bagudu in his remarks linked ascribed return of the celebration of Argungu International Fishing and Cultural Festival, which according to him was suspended due to security challenges, to efforts of the President Buhari-led administration on security.

He commended the Federal Government for supporting Rice farmers in the state, stressed that the efforts have resulted in the springing up of many Rice Mills in the state and creation of jobs.

Bagudu who described the closure of the borders as a measure to ensure the nation is self-sufficient in food security noted that European countries have ordered stoppage of importation of rice to help other nations have food security.

Earlier, the Emir of Argungu, Alhaji Samaila Muhammadu Mera in his remark, commended the Federal Government for the closure of the border and at urged President Muhammadu Buhari to sustain the tempo.

Mera appealed to the Federal Government extend the agriculture subsidy to fishing just like the government did to Rice farming through anchor borrowers.

The Emir recalled that the Argungu fishing festival which started over 80 years ago, between Emir of Argungu and Sultan Hassan Dan Mu’azu has continued in promoting friendship, unity and brotherhood among others.