If you are searching for natural ways of improving your health, then you need to learn the health benefits of ginger and garlic now.

These spices are packed with active ingredients that play a variety of roles in your body. They are available in various forms, such as dried powder, paste, capsules, extract, and more.

Ginger and garlic have been used as both medicine and seasoning for more than 500 years. In the middle ages, ginger was used to cure the plague.

Garlic is no less important. The restorative functions of garlic were known by the ancient Egyptians, who gave garlic to slaves who were building the pyramids in order to raise their stamina and efficiency.

Nowadays, these spices are used in the treatment of different diseases from simple sniffles and colds to rheumatoid arthritis pains. They are even used as a herbal treatment for fever in some parts of Nigeria.

Some researches have found that ginger can decrease some particular tumours in people who are in pain from rheumatoid arthritis. Also, some scientific researches have discovered that the spice can reduce osteoarthritis symptoms.

Here are the main health benefits of ginger and garlic mixture.

1. Digestion Digestion plays a key role in keeping you healthy.

Ginger can be helpful in digestion by controlling high sugar levels. When sugar levels are very high, the stomach will not be able to work as it should.

Ginger helps the stomach to function properly. Garlic has been thought to keep the digestive system running smoothly and is particularly helpful in avoiding swelling or irritation of the stomach.

ALSO READ:  Trump Moves Against Transgender In US Military

Both ginger and garlic have medicinal characteristics, which allow them to reduce blood clotting.

According to MotleyHealth, ginger has been shown to reduce 60% of the production of thromboxane, which is a forceful blood clotting stimulant.

Garlic also induces the blood vessels to increase, reducing blood pressure, as
well as keeping the blood from clotting.

Diarrhoea is a rather difficult problem to have, but do not fret, both garlic and ginger can help to overcome the symptoms of diarrhoea. As for ginger, it helps with any stomach gas and spasms, and garlic can destroy harmful bacteria in your intestines.

Both ginger and garlic are known for their natural, antibacterial characteristics, and their ability to relieve congestion and loosen phlegm.

Ginger relieves congestion, softens aching muscles, and can soothe a sore throat. Garlic is considered to be an antibiotic and is often recommended for treating flu and colds.

When used together, either in a supplement form, as a tea, or in meals, such as stews and soups, the combination of garlic and ginger can become an effective and beneficial medicine when cold attacks.

Drinking ginger tea can diminish or control swelling. Ginger plays a great role in decreasing inflammation and has been used for this goal in traditional medicine for many years.

The spice contains natural ingredients, which are similar to those found in some government-approved over-the-counter anti-inflammatory combinations.

Also, ginger can help to reduce your arthritis pain. However, make sure that you don’t drink too much ginger tea.

7. Relief of flu and cold symptoms

Drinking ginger tea can help decrease your cold symptoms. This spice is thought to be the best medicine for colds in Chinese ayurvedic and traditional medicine.

In general, ginger has antiviral properties that can help to fight cold symptoms. Just drink its tea at least three times a day.

You can prepare your ginger tea with either dried powder or a fresh variant of this spice root. Just take one cup of boiling water and add either 1/2 teaspoons of the powdered ginger or one teaspoon of the freshly grated spice. Leave it to infuse for about ten minutes.

Eating garlic during the cold season is a great way to boost your immune system and keep off colds and flu. The old folk remedy is to eat a garlic bulblet, which is garlic that has been immersed in honey, at the first sign of a cold.

So, try it and see whether it works or not. A better solution is to mix these amazing products and double the effect.

Ginger tea can help to reduce some symptoms of motion sickness, such as nausea, etc. According to the Merck Manual, motion sickness symptoms include headaches, cold sweats, nausea, excessive saliva production, an upset stomach, vomiting, breathing difficulties, and vertigo.

9. Prevention of numerous kinds of cancer

Prostate cancer, bladder cancer, breast cancer, stomach cancer, and colon cancer have all been shown to have their tumours decreased after being treated with garlic and ginger.

Ginger can be used to support and nourish your cardiovascular health. Ginger is thought to be a natural blood thinner. It averts blood clotting. On the other hand, this can help to reduce your circulatory problems and blood cholesterol. LDL cholesterol and the aortic plaque depositions, which gather on the walls of your body’s veins can be treated with garlic.

According to scientific researches, garlic has amazing benefits when it comes to heart diseases.

Ginger decreases blood sugar levels. Actually, drinking 1 tablespoon of this spice juice mixed with 1 glass of water in the morning can help to control your blood sugar level. Garlic can also control blood sugar as it strengthens the level of insulin in the blood. This can help in the control of diabetes.

Usually, garlic and ginger tea is thought to be a good treatment for colds and reducing the symptoms of the flu.

Drinking the tea helps you take good advantage of ginger and garlic’s antibiotic and anti-inflammatory characteristics, as well as ginger’s reputation for relieving headaches and easing nausea.

By the way, ginger and garlic tea tastes delicious, particularly when mixed with honey and lemon. 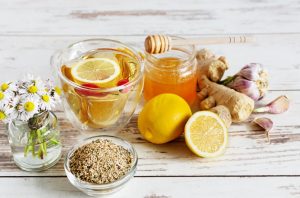 Preparation
•Peel the ginger and cut it into thin slices.

•Then cut the garlic clove into two parts lengthwise.

•Add the water, garlic, and ginger in a saucepan and boil.

•Filter the tea into the cup and add some honey to taste.

While making the tea, you can put as much ginger to the pot as you want. The residual pieces can be eaten or used for future extracts. By the way, chopped ginger can also be added to meals, in the form of spices.

BREAKING: Buhari To ASUU, Only University Lecturers On IPPIS Would Get Salaries

A suspected cultist who is a leader of Eiye Confraternity and had been on the wanted list of Ogun State...

Some hoodlums on Tuesday morning broke into the Orientation Camp of the National Youth Corps (NYSC) in Kubwa, Abuja. The...

A female police officer, CSP Olabisi Olusegun Okuwobi has been appointed as the Public Relations Officer of the the Nigeria...

The Nigeria Governors Forum (NGF) has explained that some states that still had palliatives in their warehouses chose to keep...

BREAKING: Buhari To ASUU, Only University Lecturers On IPPIS Would Get Salaries