Governor Fayemi Must Be Crazy? | By Wale Ojo-Lanre

For, no one can shut up my mouth from saying the truth. Yes. I don’t give a hoot. Let’s call a spade a spade.

Tell me, is Governor Dr John Kayode Fayemi a Nigerian politician? Is he a political animal who is expected to be ruthless, selfish, egoistic, obscurant and of self-perpetuating initiatives 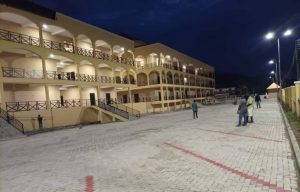 Why now? Dr Kayode Fayemi, are you a Nigerian?
Please tell me. Why are you doing this? This is wrong with you? Why can’t you behave like other governors?Why? Dr Fayemi, Why?

Ma/Sir, look at this structure? It is not an Ekiti building? This is a multi-million naira or billion naira hospital. Built by the former Governor of Imo State now Senator Rochas Okorocha, a gargantuan edifice built from the fund of the state for the state. But just because the hospital was erected by his predecessor, the current Governor has demolished it. 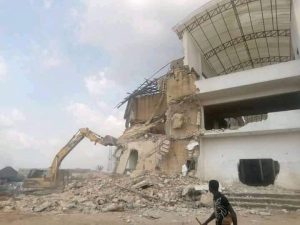 Just like that! Good governor abi? This, I am now wondering why my Governor, Dr Kayode Fayemi cannot do so.

When he has all the reasons on the earth to demolish all the egeremiti (ill-constructed and ramshackle) projects which his predecessor forced on the state, I am wondering why he chooses not only to rectify the abnormally in the so-called projects of his predecessor but to add more architectural value unto them ala Justice Ajakaiye Ekiti State High Court Building and the Ado Ekiti Central Market, two of the egeremity projects built by his predecessor.

Don’t you think Governor Fayemi must be crazy not to behave like his Imo State counterpart
Who out of senselessness demolished this beautiful hospital?

Well, I now realised that Dr Fayemi is not crazy neither is he a mad person but he is proving to all and sundry.

Soldiers Went To Lekki Tollgate With Live Bullets For Self-Defence, No Gunshot Signs During My Visit – General

An unidentified man alleged to be an Okada thief was on Friday morning burnt to death at the Mile 110...

The Senate on Thursday warned that other countries could impose a travel ban on Nigerians if the Federal Government failed...

The minister of information and culture, Lai Mohammed has said President Muhammadu Buhari will complete his tenure despite the calls...

A Kenyan man who “came back to life” in a morgue where he had been taken after being presumed dead...

Soldiers Went To Lekki Tollgate With Live Bullets For Self-Defence, No Gunshot Signs During My Visit – General

Messi Should Have Been Sold, Says Barca Boss Tusquets