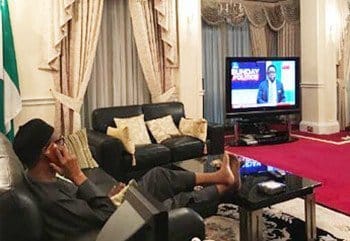 FEDERAL Government has debunked the claim that Governors are planning to send a delegation to confirm the health status of President Muhammadu Buhari in London.
The Minister of Information and Culture, Alhaji Lai Mohammed, who state this in Abuja said there was there is no iota of truth in the report.
“I think it is very much in order to use this opportunity to debunk the report in a section of the press today (Thursday) that Governors are meeting in Abuja and they will at the end of the meeting send an emissary to London to see President Buhari.
“I want to say categorically and emphatically that there is no iota of truth in this. Governors are not meeting here in Abuja because there is no need for it and there is no plan to send any emissary to London to see the President. Again I want to say that the President is hale and hearty in London where he is observing his 10-day vacation,” he said.
On the humanitarian crisis in the Northeast, the Minister said he fully appreciated the enormity of the challenge, having visited parts of Borno State, including the IDPs camps, upon his assumption of office in 2015.
He said the development had prompted him to launch a massive public sensitization campaign for Nigerians to take ownership of the war, thus complementing the efforts of the military, which has succeeded in decimating Boko Haram.
“We believe that until Nigerians take possession of the war, the full rehabilitation, reconstruction and resettlement will not take place. We are also aware that there is a bigger war to be won, and that is healing the psychological wounds that have been created by the insurgency,” the Minister said.
He assured the committee the support of his ministry to de-radicalize the youths, whose orientation has been affected by the warped ideology of Boko Haram, and equally change the narrative on the Northeast.
“On our part, we will assist you in any manner because we are very particular about the narrative and this is where your task becomes onerous. We must de-radicalize our people. We must ensure that the young ones don’t just hear one narrative,” said  Mohammed.
The Minister who lamented how bad governance, poverty and hopelessness fuelled the insurgency in the Northeast commended the Governors of Borno, Yobe and Adamawa for their efforts at reversing the ugly trend.
Responding, the Chairman of the Committee, Mr. Yusuf Buba, said President Buhari had itemized some salient initiatives towards the rebuilding of the social and economic lives of the people because of the large-scale destruction of lives and property and the widespread displacement of people.
“President Buhari’s plan for long term economic development covers infrastructural development, agricultural revitalization, educational transformation, health sector reforms, entrepreneurship and job creation, trade and marketing development, safety and security, environmental protection, solid mineral development, good governance and regional strategic growth management,” said Buba.
He however, solicited the partnership of the Federal Ministry of Information and Culture in the areas of citizens and stakeholders mobilization through strategic communication of the philosophy of the Buhari Plan for the rebuilding of the North-East, as well as de-radicalization to win the hearts and minds of the youths in the region.
ALSO READ:  IMF Predicts 3.4% Economic Growth In Nigeria, Other Sub-Saharan Africa In 2018
Advertisement
Loading...