THE Minister of Information and Culture, Alhaji Lai Mohammed, said the phenomenon of fake news, if left unchecked, poses more threat to the nation than insurgency and militancy.

The minister reiterated this position on Tuesday in Abuja at the seventh edition of the National Security Seminar with the theme “Consolidating on the Gains of Counter Terrorism Operations in Nigeria’’.

Mohammed said that the phenomenon of fake news propagated majorly by the social media “is so serious that it threatened to break the country rapidly even more than insurgency.”

He noted that to consolidate on the defeat of the Boko Haram insurgent, the armed forces should give special attention to its communication and information dissemination strategy.

“We must pay adequate attention to communication strategy and have our people who will be very active also on the social media.

“It is a front that has been largely neglected which we must now pay special and adequate attention to,” he said.

According to him, fake news phenomenon is a situation where someone or some persons will fabricate stories capable of setting one group or religion against the other and send them out through the social media.

“Regrettably, fake news is circulated worldwide through the means of the social media and it travels faster. “Only recently, we have to refute the fake news that Nigeria today is the most difficult place for Christians to live.

“All these news are unfounded, fake and has the capacity to set one religion or group against the other,” he said.

The minister said the most recent of such disinformation was the news of alleged killing of some members of a pro-Biafra group, the Indigenous People of Biafra (IPOB).

Mohammed said that the allegation was false, malicious and intended to set the country on fire.

He also recalled the recent visit by two leaders of All Progressives Congress, Bola Tinubu and Bisi Akande to President Muhammadu Buhari in London which the champions of disinformation claimed it never happened.

He said similarly, it took the intervention of the US government to set the record straight through a release that its President, Donald Trump truly had a telephone conversation with President Buhari.

Alade said the theme of the seminar was apt because having technically defeated Boko Haram, there was the need to build upon the gains and guide against relapse or outbreak of any other crisis.

On his part, the Minister of Defence, Mansur Dan-Ali commended the armed forces for winning the insurgency war in the North East within a short period into the administration of President Buhari.

The minister, who was represented by the Permanent Secretary in the Ministry, Danjuma Shedi, said that the isolated attacks being witnessed were expected but assured that there would be an end to them soon. 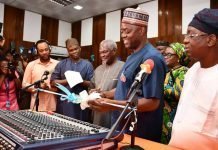 NLC Protest Against Fuel Price Hike In Abuja In Pix