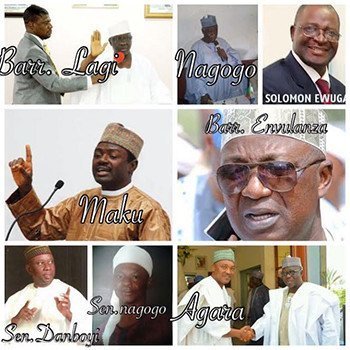 ONE of the contentious issues in the Nigeria’s political space hitherto has been the formula on how to share power. Zoning appears to have been an answer to that conundrum. While one of the most discussed and misconstrued issues in Nigerin politics today, zoning should override competence in appointing people to public offices

The Nasarawa State Equity Forum (NSEF) and the entire good people of Nasarawa State aspirations have been usually centred on how to develop a broad and universally accepted framework for crisis free and equitable transfer of power, including political participation.

On that note, I comrade Usman Tanze Danjuma the president of Nasarawa State equity forum (NSEF) with every sense of patriotism I must point out that the political elites have always accused each other of various anti-democratic actions that have brought the political system to a state of near collapse.

In order to fashion out a new formula to create a basis for equitable distribution of political power through the electoral process, one of such suggestions was the proposal for the principle of zoning of political offices among the three senatorial zones.

Although the recommendation was never contained in the 1999 constitution, the three political zones have come to be recognised as the basis for power sharing. It was on the strength of this that the Peoples Democratic Party (PDP), through a consensus, adopted zoning of political offices for the subsequent general elections.

Zoning was originally introduced into Nigeria’s polity during the second republic (1979- 1983) in the Article 21 of the internal rules and regulations of the National Party of Nigeria (NPN), which was the ruling party at that time.

In the fourth Republic, the PDP, which has been in power since 1999 till 2011,retained this practice internally.

The practical operation of zoning demands that key positions, such as that of the office of the Governor of the state ,the deputy,the speaker and his deputy speaker of the House and secretary to the state government be occupied by people from different zones.

But has Nasarawa State fared well with this practice, has it managed to through the practice of zoning principle, get those who are really competent to hold certain positions to be appointed into them or has zoning relegated competence?

I want to make it clear of what zoning truly represents in Nasarawa state.

“Undoubtedly, one of the most discussed and misconstrued issues in Nasarawa politics today is the issue of political zoning. Zoning, properly defined, is an arrangement in which political offices at the national, state and local government are distributed or rotated to ensure that no part of any political configuration is short-changed or marginalised.”

I want to say it in clear terms that if zoning is properly done, it ensures equity, equality, cohesion, trust and above all, stability, in addition to the fact that it also ensures collective support for any political authority.

While cases have been made for the ability of an extra-constitutional principle like zoning to ensure national unity and stability, the question that is often asked by many is whether Nasarawa State should forgo merit or competence for the sake of national integration.

Many have contended with the fact that through zoning, the appointment of public office holders would naturally be based on sentiments, rather than competence.

I strongly recommend that merit should be the only criteria for zoning and political appointments in Nasarawa State comes 2019.

“All these years, we have continued to rely on zoning, yet no real change has taken place in our socio-economic life as a zone.That in itself is an indication that we cannot be doing the same thing all the time and expect a different result. It is time we jettisoned such principles like zoning. Political appointments should be based on merit, and only technocrats should be allowed to handle sensitive public positions. For me, that’s the only way we can experience real change in Nasarawa State” zoning is more of a paradox in Nasarawa State .

“Of course, with the nature of our extreme plurality, there is the need for a delicate balancing, but I don’t see how a serious society that wishes to really develop will continue to elevate zoning over merit. I think zoning is necessary but not desirable. A deep interrogation would reveal that zoning is also an elite arrangement for sharing the so called national cake,”

if Nasarawa State must grow, then its leaders must reconsider zoning.

“Someone from my zone doesn’t necessarily represent my interest. It is very possible the person wouldn’t even defend my rights. So, zoning itself is antithetical to development but it has become unavoidable because it appeals to people’s emotions,”

For me, zoning does not promote mediocrity and incompetence if properly executed.

“For me, I think the government should still apply the principle of merit in applying zoning systems for every political office, knowing full well that in the present world order from the Nigerian perspective, zoning has been accepted as an important political reality. Hence, there is always a concerted effort to ensure its application in all issues or distribution of offices to reach a harmonious and stable polity,” he emphasised.

“It is my sincere advice to the government to ensure that the best is selected from northern zone to give every part of the whole state opportunity to serve and of course the much needed sense of belonging. It is only through this method that a stable polity would be achieved for successful implementation of people-oriented policies, which would bring about positive change in the lives of Nassites .

On how to strike a balance in Nasarawa State, I comrade Usman Tanze advice the All Progressives Congress (APC) government to be very careful to guard against unsettling people’s emotions, since that is now the situation they have found themselves in.

“They must try to balance between zoning and merit. And since they have ridden on the crest of change, they must not continue to adopt the ways of the PDP,”

Zoning, though not necessarily democratic or constitutional, has enabled inclusion of diverse groups and interests in the sharing of political power. If the principle according to commentators is perfected, it will go a long way to diffuse ethnic, religious and other sectional interests as the basis for sharing political offices.

However, there is a tendency that the principle of zoning will erode meritocracy on which political development is hinged. This has the potential to create a problem as political leaders who pose as godfathers or kingmakers and ethnic chauvinists will install such candidates who can easily be manipulated.

A major recommendation for the principle of zoning for the government is to embark on constitutional reforms that will ensure the enshrinement of the six geo-political zones in the constitution and making it the basis of power sharing in the country. By so doing, the zoning provisions would become stronger instruments if they carry the force of supreme law.

Relatedly, if properly perfected and implemented, zoning would propel values such as integrity, ethnic and religious tolerance, co-operation consensus and accountability, through equity which will be the dominant ones in the polity, instead of ethnic chauvinism which forms the basis of political engagement in Nasarawa state.

The government should also realize that Nassites are now more politically aware, and it cannot be business as usual. The expectations for a better Nasarawa state are high and Nassites aspire for positive change. These expectations and aspirations must not be jettisoned, otherwise, Nigerians will revolt again.

Nasarawa North has all it takes to move the state ahead by 2019:

Lagi Innocent was a legislator with the Nasarawa State House of Assembly between 2008-2011. He was a commissioner of justice and He is currently a Senior partner at Adamu Ahamed Ibrahim and co and a volunteer clinical law teacher with Nasarawa State University, Keffi.

Labaran Maku (born 1962) is the former Minister for Information in Nigeria. He is from Nassarawa State. Maku was born on January 1, 1962 at Wakama District in Nassarawa Eggon Local Govt Area of Nassarawa State and is married with children.

Sen. Yusuf Musa Nagogo (p.hd) (born 1 January 1957[1]) is a Nigerian politician who was declared elected in the April 2011 elections for the Nasarawa North Senatorial constituency of Nasarawa State, Nigeria. He ran on the Congress for Progressive Change (CPC) platform. He hails from Wamba

Mr Mathew Umbugaku is credited with establishing APGA in the state and was elected unopposed in the party’s governorship primary on December 9, 2014 for 2015 general elections.
Mr. Mathew Umbugaku a successful business man is happily married with children.

Suleiman Nagogo is the former maritime boss! He hails from Wamba.

Sen. Solomon Ewuga was a deputy governor, former minister of state for FCT and former senator representing Nasarawa north from 2012 to 2015.

Army Takes Over In Turkey

JAMB And The Politics Of Cut-Off Marks By Reuben Abati