PRESIDENT Muhammadu Buhari has expressed his gratitude to Nigerians who called and also prayed for him while his medical vacation lasted in London, United Kingdom. 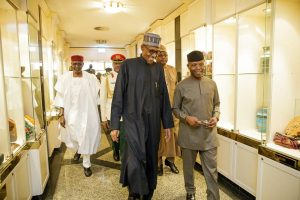 The President who spoke in a meeting Vice President Yemi Osinbajo, members of the Federal Executive Council (FEC), all heads of security agencies including the Service Chiefs at the First Lady Conference Room upon his arrival to the Presidential Villa, Abuja earlier on Friday said he still needed more rest.

He said that Osinbajo who has been acting in his place in the last 51 days he has been away would continue to act.

‎He later met with them at the First Lady Conference Room at the Presidential Villa.

He said he felt much better, saying that “whatever the case I’m still grateful to Nigerians”.

According to him, the cost his treatment abroad was not lost on him even as he said he received the best of treatment.

A 37-year-old citizen of the Republic of Benin, Gbese Peter, has been arrested by men of Ogun State Police Command...

The Federal High Court in Abuja has been asked to void the outcome of the primary election held in Ondo...