WORKERS at the Nigerian Embassy in Washington have been on a sit-in, paralysing activities at the mission in the United States.

The workers said they have not been paid salaries for the past five months, forcing them to embark on the strike.

Although some departments of the embassy are said to still be functional, they threatened to report the embassy to the U.S. Labour Department.

There were no official functions at the embassy on Tuesday, as the workers only gathered at the lunch room in the basement.

The embassy in Washington and the consulate in New York are said to be currently cash strapped, with staff and local workers not being paid for months.

A source close to the Presidency said there has been a lot of mismanagement of resources in the Ministry of Foreign Affairs, causing a lack of concern for staff welfare and difficulty in the missions being able to carry out their functions. 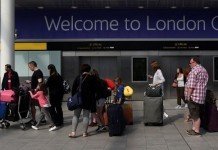