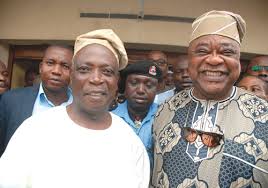 The meeting which is part of ongoing efforts aimed at repositioning the party for the 2019 elections took place at the PDP National Secretariat, Wadata Plaza, Wuse, Abuja.

Represented by Senator Femi Lanlehin and Kareem Tajudeen, Ladoja and Akala are currently chieftains of the Accord Party and the All Progressives Congress, respectively.

In his opening remarks, National Publicity Secretary of the party, Prince Dayo Adeyeye urged the Oyo PDP stakeholders to sheathe their swords in the interest of the party, noting that their lack of unity was what led to the victory of Abiola Ajimobi in the 2015 governorship election in the state.

“The present governor is ruling with just 32 per cent of the vote cast because the PDP house was not in order. Let us make the PDP the winning party again because there’s no need to be in a party that is losing,” Adeyeye said.

Adeyeye also urged stakeholders of the party from Osun State who also visited the PDP secretariat to put their house in order, adding that “We want to bring everybody together and it is clear that all those maintaining hard-line position will not take us anywhere.

” We are aware of all the facts, I want to appeal to all of you to be more united more than ever before.”

On his part, Senator Makarfi appealed to the Osun PDP members to bury the hatchet, noting that the issue on inconclusive congress, if not resolved, is capable of hurting the party in the future.

Earlier, Forum of former Presiding Officers of the Federal House of Representatives while on a solidarity visit to the leadership of the party pledged to support the PDP ahead of the 2019 polls.

Led by former Speaker, Honorable Dimeji Bankole and Austin Opara, the forum called on the NCC to carve out roles for its members, promising to give its best always.

Responding, Makarfi thanked the ex-lawmakers for finding time to visit the party. He noted that now that the Supreme Court has resolved the leadership crisis in the party, it was time to translate same to political success.

“We’ve gotten judiciary victory, we need to consolidate and translate it into political victory. Political victory means expanding the scope of the party, reconciling with the reconciliables and attracting members into the party that will enable us regain political power at the centre by overwhelming majority.

“What I don’t want is for one party to dominate. We want a healthy competitive democracy where people will freely choose their leaders.

“We must have a large heart, but having a large heart doesn’t mean that we will not be conscious of the role played by each and everyone of us,” said Makarfi.

The NCC chairman further said the PDP is championing a level playing field where all the electorate will choose their representatives without any form of rancour.

“Let’s build a strong and virile political party. Let there be a level playing field for people to freely chose who they want to present as party’s candidates. That is the surest way to get to power come 2019. That is what internal democracy is all about,” he stressed.
‎
Makarfi also stated that objectivity and transparency in running the affairs of the party so that nobody, whether old or new member would feel excluded is the way to go.

“We will stick to the party guidelines and constitution in doing whatever we do. We must stop cutting corners. We live in a high litigious society. When you cut corners thinking that nobody will see you, a lot of people will see you, at a time you least expect…

“We must consult on fundamental issues, use consensus as much as ‎possible and move forward,” he noted.