EKITI State Governor, Ayo Fayose, said on Monday he has been having private discussion with potential governorship aspirants in the Peoples Democratic Party (PDP), telling them “to allow him seek God’s consent” on the choice of a successor.

He said although aspirants have the right to aspire for the state’s number one seat, he (Fayose) also has the right to support whoever God asks him to support for the 2018 governorship race.

Fayose said he had invited aspirants like his deputy, Prof. Kolapo Olusola; former Commissioner for Works, Mr. Kayode Oso and former Wema Bank Group Managing Director, Mr. Adebisi Omoyeni “into the room” to allow him seek the face of God on his successor.

The governor spoke on Tuesday at his Afao-Ekiti country home during a meeting with PDP aspirants and leaders from Ikole, Ijero and Ise/Orun local government areas of the state.

“If I were asked to pick a candidate to succeed me, I would have picked Kayode Oso straight off. But I have called him into the room and told him to allow me seek God’s consent concerning it.

“I have called my deputy, Prof. Kolapo Olusola. I have also called Bisi Omoyeni into the room and asked him to allow me seek God’s consent. Whoever God chooses, we will support among the aspirants. Whoever that is not the one, the spirit of sportsmanship should be embraced.

“I have nothing against Prince Adedayo Adeyeye. I have great respect for him, from ministerial appointment to chairmanship (of the Governing Council) at Ekiti State University and then his recommendation to the party at the national level.

“I have always stood by him. I wouldn’t have done that for someone I don’t love, so mischief makers had better looked elsewhere to play their game.” 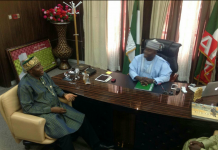