IN his bid to save his seat, Senator Dino Melaye, Wednesday, approached the Court of Appeal in Abuja, begging it to declare the recall process the Independent National Electoral Commission (INEC) initiated against him as illegal, wrongful and unconstitutional.

Melaye who is currently representing Kogi West, in the appeal he lodged through his team of lawyers led by Chief Mike Ozekhome, SAN, prayed the appellate court to set aside the high court judgment that gave INEC the nod to act on a petition by his constituents, seeking his recall from the Senate.

He raised eight grounds of appeal he said the higher court should consider and nullify the judgment that Justice Nnamdi Dimgba of the Federal High Court in Abuja delivered against him on Monday.

Specifically, the embattled lawmaker urged the apellate court to declare the petition purportedly presented to INEC for his recall as illegal, unlawful, wrongful, unconstitutional, invalid, null, void and of no effect whatsoever.

As well as to, “Grant an Order of perpetual injunction restraining the 1st Defendant/Respondent (INEC), whether, by itself, staff, employees, agents, servants and or privies howsoever called, from commencing or further continuing with the process of acting on the purported petition presented to it by the purported constituents of the plaintiff against the Plaintiff”.

Meanwhile, INEC, acting on the strength of the high court judgment, has already fixed timetable for the recall process which will entail the verification of signatures behind the petition against the appellant.

The electoral body earlier declared its readiness to resume the recall process that was paused by the suit marked FHC/ ABJ/CS/567/2017, which Melaye filed to quash the process.

Melaye had in his suit, insisted that the petition against him was signed by dead and fictitious persons he said were not from his constituency.

Aside INEC, other respondents in the appeal he filed yesterday were three persons that masterminded the petition against him- Chief Olowo Cornelius, John Anjorin and Mrs Iyabose Owolabi.

In his first ground of appeal, Melaye insisted that Justice Dimgba “erred in law when he held that the petition presented to INEC the lst Respondent before the court for the recall of the Plaintiff/ Appellant was valid, even when the petition exhibited by INEC was not signed by more than half of the registered voters in the Plaintiff’s/ Appellant’s constituency as is required by section 69 of the 1999 Constitution of the Federal Republic of Nigeria, as altered.

According to him, “The petition presented to INEC(1st Respondent) by the purported constituents and exhibited before the court as Exhibit INEC 1, was only signed by three persons, which number is less than the half of the registered voters in the Plaintiff’s/ Appellants constituency as provided for by section 69 of the Constitution of the Federal Republic of Nigeria, as altered.

“INEC (1st Respondent) was served with a notice to produce the petition as signed by more than one-half of the registered voters in the Plaintiff’s/ Appellants constituency but failed to produce same before the lower court.

“The petition presented to INEC by the purported constituents of the Plaintiff/ Appellant was signed by some dead persons whose death certificates were duly exhibited and uncotroverted.

“The signatures of most of the constituents on the petition purportedly presented to INEC for the recall of the Plaintiff/Appellant were procured by fraud and the Plaintiff/ Appellant exhibited affidavits deposed to by some of the said constituents disclosing these facts which were never contradicted.

“A mere statical analysis and general summary for the recall of Senator Dino Melaye Exhibit DM13, DONE BY INEC itself which the trial court wholly relied on to hold that the petition was valid, can neither replace nor take place of the petition itself, which was tendered by INEC as exhibit INEC lin their counter affidavit to the Plaintiff s/ Appellant’s Originating Summons,

“The trial Court ought not to have relied ongeneral summary for the recall of Senator Dino Melaye and statical analysis by INEC to hold that the petition purportedly presented to INEC by the Plaintiff’s/ Appellant’s constituents was valid, even when the only petition which was exhibited before the court clearly did not meet the constitutional requirement of the maximum number of registered voters in the Plaintiff’s constituency”, he argued.

More so, he contended that “the learned trial judge erred in law when he held that the 90 days provided for by section 69 of the Constitution of the Federal Republic of Nigeria, as altered, was paused since 23rd June, 2017, when the Plaintiff/Appellant commenced this action and subsequently ordered that the period would continue to run from September, 2017, the date of the judgment of the trial court, subject to the final determination of the suit, even when no such relief was sought by any of the parties in the suit”.

It was equally his position that the trial judge erred in law when he held that the Plaintiff/Appellant was not entitled to fair hearing from his constituents.

According to him, “The grounds that could lead to loss of confidence in a serving member of the National Assembly or State House of Assembly was not specified by the constitution.

“In line with the principles of fair hearing the Plaintiff’s/ Appellant’s constituents ought to have informed and availed the Plaintiff/Appellant with copies of their grouse against him before proceeding with the submission of the petition to the 1st Respondent.

“The 1st Respondent upon receipt of the petition ought also to have availed the Plaintiff/Appellant with a copy of the petition to enable him ascertain the veracity or authenticity of same having purportedly been submitted by his alleged constituents.

“The 1st Respondent ought to have availed the Plaintiff/ Appellant with copies of the petition allegedly for his recall as signed by more than half of the registered voters in the Plaintiff’s/Appellant’s constituency.

“The 1st Respondent ought not to have verified the petition by which conducted it authenticated same the basis of which exhibit DM13 was produced without availing the Plaintiff/Appellant with copies of the petition”, Melaye added.

Consequently, he prayed the appellate court to allow the appeal and abort his recall process.

Lessons In Digital Rights Advocacy From The Kenyan 2017 Elections 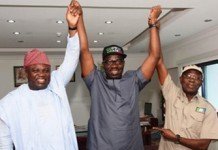