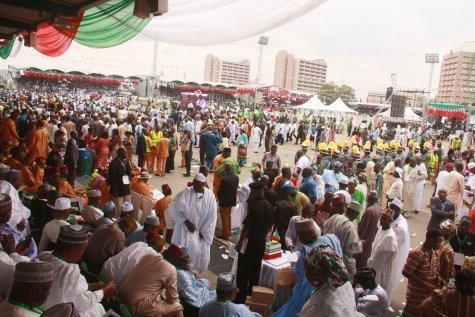 *As Eagles Square Agog For Convention

This massive withdrawal of contestants from the South-West gives a brighter chances for the geo-political zone to produce the next national chairman of the Peoples Democratic Party (PDP).

George, who announced his withdrawal decision moments after the convention screening committee had cleared him for the exercise, insisted that he did not step down for another candidate and also raised concerns about the fallout of the convention.

He said, he withdrew because the South West was already cheated with the entrants of aspirants from the South-South.

Early hour of today (Saturday), another key contestant and PDP flagbearer in the 2015 Gubernatorial election in Lagos, Dr. jimi Agbaje, reportedly withdrew from the race.

Also Former Governor of Ogun state and one of the contenders in today’s National Chairmanship position of the opposition Peoples Democratic Party, PDP, Otumba Gbenga Daniel has withdrawn from the race.

And the last was the withdrawal of Senator Ladoja, which happened at the last minute to the commencement of the convention.

However, the Eagle Square Abuja venue of the Peoples Democratic Party ( PDP) national convention is already electrified with music ahead of the commencement of the convention.

Heavy security, comprising men of the National Security and Civil Defence Corps, Police, and also, officials of the Federal Road Safety (FRSC) were deployed around Eagle Square, Central Abuja, since early hours of Saturday preparatory to the commencement of the Peoples Democratic Party (PDP) national elective congress, restricting vehicular and human movement around the area.

Also, early into the function, leaders of the party have started arriving, among them were Vice President Atiku Abubakar, who returned to the party two weeks ago after being away for four years; the immediate past vice president, Namadi Sambo; National Caretaker Committee, Senator Ahmed Makarfi and chairman of the party’s Board of Trustees (BoT), Senator Walid Jibrin. While Atiku arrived the convention venue Atiku arrived at 10.45am, Sambo arrived at about 10.55 am.

Delegates from the 36 states and the Federal Capital Territory (FCT) have also started arriving the venue.

States that have arrived are Gombe, Ekiti, Enugu, Ebonyi, Delta, Borno, Benue, Bauchi and Akwa Ibom. Others are Abia, Niger and Nasarawa.

There Is No Resurgence of Boko Haram ―Lai Mohammed