FORMER Minister of Defence, Gen. T.Y. Danjuma (rtd), has accused the Nigerian military of prejudice, and enjoined Nigerians to depend less on the Armed Forces, which according to him “are now biased in their operations.”

Danjuma, who made the disclosure in Jalingo, Taraba State, yesterday, during the maiden convocation of the state’s university urged Nigerians to defend themselves, rather than rely entirely on the institution for protection.

Recall that Taraba has over the years witnessed alleged killings by armed herdsmen.

He expressed regret that the institution, which used to be a shield for citizens, irrespective of religion, tribe or political party affiliation, has descended into partisanship.

The Armed Forces now “collude with armed bandits” to attack innocent Nigerians,” he said, warning: “If you depend on them to stop the killings, you will all die one by one.”

He urged the people to rise up and “protect themselves” from killings by “ethnic cleansers.” He cautioned that unless there is a rethink in the way the military carries out its duties, “Somalia will be a child’s play.”

He said: “Defend your country, defend your state and defend yourselves.” He stressed that since the people have nowhere else to go, they must “collectively resist any attempt that would frustrate the growth of the country.”

He wondered why the Armed Forces have derailed from its constitutional responsibilities by aligning with “killers” to intimidate and maim innocent Nigerians.

This came as suspected herdsmen at Dong village in Jos North Local Government Area of Plateau State displayed a show of force yesterday night, shooting sporadically into the air.

Observers say the action could be a move to intimidate the residents or assert their military capabilities.

A competent source in the area told The Guardian: “This activity was going on in full glare and hearing of the security personnel without any move on their part. It was as if they were not concerned at all; as if security was not their duty.”

The source added: “My brother, this is beyond religious consideration. Ethnicity and nationality are coming to the fore and we are just helpless. Government is aware, the military is aware, the Operation Safe Haven is aware. But if you confront them, they will tell you they are on top of the situation.

“I don’t know. I don’t know. What is all this? Do we have shortage of military manpower? But the security personnel we have are indifferent to people’s plight.

They are quick to swing into action and deal with the situation appropriately and decisively only if it concerns them and harmless civilians. This is very unfortunate.”

Ekiti State Governor Ayodele Fayose, meanwhile, has stressed: “The silence of Nigerians must not be interpreted as endorsement of animalistic killings and nepotism flourishing under this government of President Buhari, but a graveyard silence that will result in electoral failure next year.”

In a statement by his Special Assistant on Public Communications and New Media, Lere Olayinka, yesterday, Fayose said: “In a democracy, the people are entitled to their views and can’t be silenced in their own land, particularly when the President has failed to protect Nigerians who are daily being killed, especially by herdsmen and Boko Haram terrorists.

ALSO READ: Nigeria: Jonathan, Others Calls For Restructuring Before 2019

It is the rights of the citizens to call governments to order when they fail to live up to their responsibility.”

He said Nigerians would resist any attempt by the President to hide under the “arranged abduction and release of the Dapchi girls” to achieve his alleged dictatorial aim of further clamping down on those who chose to speak out on his government’s failings. 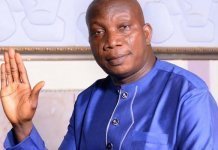