EKITI State Governor, Mr. Peter Ayo Fayose, said Nigerians have been unlucky with President Muhammadu Buhari as the president of the country.

This is just as he described the President as a captured president who has been reduced to offering condolences to Nigerians slaughtered by herdsmen instead of taking firm action to stop the atrocities.

“Nigerians have been unlucky with Buhari as president. He is too old, too analogue, too incompetent, too clueless and is not ready to admit and yield for a competent leader. This country has never had it this bad. Gradually, Buhari is becoming a maximum ruler,” he explained.

Reacting to the latest killings by Fulani herdsmen in Benue State, Fayose wondered why a retired Army general and one-time military Head of State who contested and won election on the premises of providing security to the citizens have suddenly become lame duck.

“This is a killer government”, the governor said, adding that it is shameful that Nigerians are dying daily with Buhari clueless and incompetent to handle the crisis.

“It is beyond dispute that the Buhari administration has lost the battle against insurgency and the Fulani herdsmen. Buhari is helpless as he is reduced to offering condolences on a daily basis.

“Nigerians are dying on a daily basis. Innocent souls are being wasted by herdsmen and the Buhari administration has lost all moral right to continue in office. Why is he still sitting in office? Doing what, if I may ask”, he added.

Fayose, in the statement issued by his Chief Press Secretary, Mr. Idowu Adelusi, wondered that this was a government that lambasted the PDP administration of ex-President Goodluck Jonathan for cluelessness and incompetence on security matters “but the same Jonathan administration era is now looking like the golden age of security of lives and properties in Nigeria.

“At no period since 1999 has life been this cheap. Life has become nasty, brutish, and short under the Buhari administration,” he said.

Gov. Fayose also expressed misgivings about recent spate of controversial judgments by courts which he said gave the impression of collusion between unscrupulous judges and the Buhari administration to truncate democracy and lead the country into anarchy.

“The situation is getting so bad that we do not know whether the Constitution of the country has been unofficially suspended.” 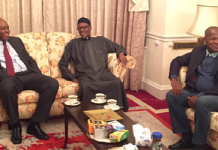 Fayose, Family Members Not Barred From Travelling To US -Aide