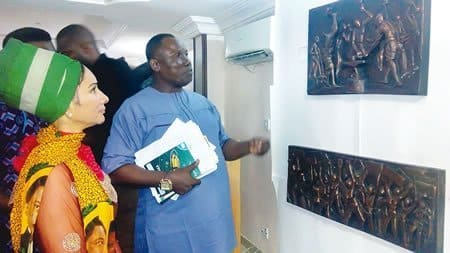 THE Anambra State government says it will reposition the arts sector, to make the state a reference point in artworks.

The state Commissioner for Indigenous Artworks, Diaspora Affairs, Culture and Tourism, Mrs Sally Mbanefo, made this known during the official flag off of the ongoing four days-arts exhibition organised by Society of Nigeria Artists (SNA), Anambra State chapter at Nibo in Awka South Local Government Area of the state.

The Commissioner who described her appointment in the ministry as a dream come true assured the artists in the state of more favourable atmosphere to operate.

Speaking further, Mrs Mbanefo, called on parents and guardians to encourage and support their children and wards that are artistically talented, as the field makes one self-reliant and could serve as remedy to the prevailing problem of unemployment amongst the youths in the country.

Speaking earlier during the exhibition the state chairman Society of Artists, sculptor Tony Otikpa, while appreciating the commissioner on her visit and lofty vision in the sector, assured her of their smooth partnership with the ministry.

He further listed some major challenges in Arts sector like the lack of arts village and low patronage.

Also, some of the exhibitors including the Managing Director of National Lights Newspapers, Mr Chuka Nnabuife and a senior lecturer at Nnamdi Azikiwe University Awka, Professor Clifford Nwanna, while describing arts as the totality of what man can create and an expression of life, called for people’s attitudinal change towards arts as man cannot do without it.

In a separate remark, Nze Uche Nworah, the Managing Director of Trig Point Hotels who is an art collector, Mr Chukwudi Ogbuefi, expressed delight in witnessing such an event and prays for sustenance.

Highlight of the event was inspection of artworks by the commissioner and others that graced the occasion.

Funny Reasons Nigerians Will Not Buy The New iPhone 7