THE Nigerian Air Force (NAF) on Monday said that gunmen had attacked the guard post at the NAF Helipad at Igbodene in Yenagoa, Bayelsa, killing an airman.

The News Agency of Nigeria (NAN) reports that the attack appears to be a resuscitation of the deadly confrontations in the resource-rich Niger Delta, which has seen a lull in recent years.

The NAF Director of Public Relations and Information, AVM. Olatokunbo Adesanya, who confirmed the incident in a statement in Abuja, said the attack occurred early on May 13.

“In the early hours of Sunday, a group of unknown gunmen attacked the guard post at the Nigerian Air Force Helipad at Igbodene in Yenagoa, Bayelsa State.

“Although the NAF personnel on duty were able to repel the attack, an airman paid the supreme sacrifice in the process.

“The Chief of the Air Staff, Air Marshal Sadique Abubakar, has ordered an investigation to unravel the circumstances surrounding the incident,’’ Adesanya said.

The Federal Government has been battling militants in the Niger Delta for many years. The militants have been fighting to have greater share of resources in the area.

Call Off The Ongoing Strike, Tinubu Appeals To NLC

Atiku to Buhari: I Will Dislodge You, With Or Without US... 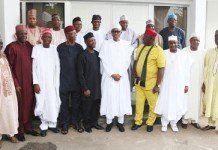 No Basis For Increase In Petrol Prices —NNPC Boss