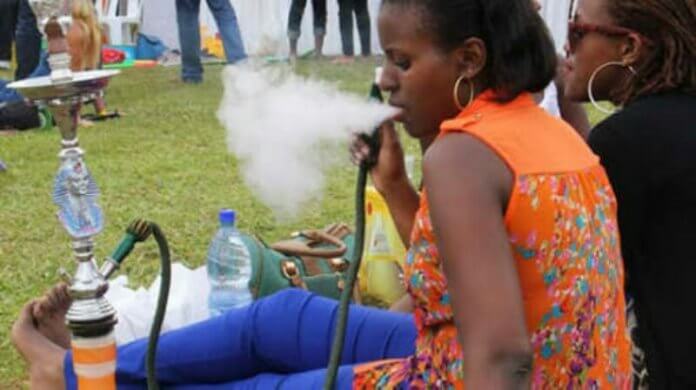 SHISHA or also known as sheesha could be said to be the way of life among the ‘big boys (including girls)’, especially, the younger ones, not only in Nigeria, but globally.

Shisha is a tobacco mixed with molasses or honey that is used for Hookah smoking. Unlike the tobacco in cigars and cigarettes, which contains industrial chemicals and artificial additives, shisha is made of only natural substances and comes in a wide range of flavors.

Shisha is said to have originated from the northwestern provinces of India along the border of Pakistan in Rajasthan and Gujarat. It soon traveled to Iran and the rest of the
Arab world. However, it was in Turkey that completed its revolution, where design and tradition took form as part of its cultural characteristic. Since then, shisha has been the standard of smoking in the Middle East.

Shisha’s Way To The Limelight…

Shisha’s entirely different smoking experience cannot be unconnected to its popularity, not only in the Middle East but also globally. It has been used to smoke away stress due to of the relaxing sensation that one gets and the pleasure of a flavourful smoke as well.

Another reason for its increasing popularity is the widespread misconception that it is a safer alternative to cigarette and cigar smoking. Aside from its misleading labeling like “contains 0 mg tar,” many believe that since tobacco is inhaled through water, the harmful ingredients are filtered.

Unlike cigarette smokers, shisha users are not well informed of the damaging effects of shisha to the body. Only few research have been done addressing the shisha or tobacco smoking using water pipe, and on its prevention and cessation strategies.

The Health Effects And Dangers Of Shisha

According to the World Health Organization (WHO) Study Group on Tobacco Product Regulation (TobReg), contrary to the popular belief, the smoke that comes from a water pipe contains numerous toxicants known to cause lung cancer, heart disease and other diseases. Although it is true that the water does absorb some of the nicotine, still shisha smokers are exposed to a sufficient dose of nicotine to cause addiction. The World Health Organization further revealed that a single session of smoking shisha yields a nicotine intake equivalent to more than one pack of cigarettes. This means that a shisha user can expect the same risk that cigarette smokers are facing.

In the research conducted by the Department of Health and Center for Tobacco Control Research, people who smoke shisha or herbal tobacco can suffer from high carbon monoxide. As with cigarettes, the presence of high levels of carbon monoxide, tar and heavy metals can be carcinogenic or cancer causing in the body. Thus, there is a high risk not only for cigarette smokers but also for shisha smokers to suffer from cancer, particularly of the lips, mouth, tongue, throat and lungs, and also cardiovascular disease.

Not many shisha users realise that the risk of getting communicable diseases is very high. Shisha smoking may not directly cause it but it is associated with the sharing of water pipes. Getting tuberculosis, herpes and other common illnesses like cold and flu viruses are some of the dangers of shisha which can be another problem.