THE Senate on Wednesday directed the Minister of Defence, Dan Ali Monsur to retract the statement he made that the anti-grazing law in Benue and Taraba should be withdrawn.

Senator Barnabas Gemade, APC, Benue, had raised a motion under matters of public importance stating that just on Tuesday that seven people were killed and several houses burnt in his senatorial district.

But quickly pointed out that “most disturbing is the fact that upon all that was discussed at the security meeting held on Tuesday what came out from the Minister was that the anti-grazing law should be withdrawn.

He also requested that one minute silence should be observed for the departed souls.

He appealed to his colleagues that the defence minister should withdraw the statement credited to him because the killings started before the enactment of the law.

The presiding officer, Bukola Saraki put the motion to a voice vote and the ays unanimously endorsed it. 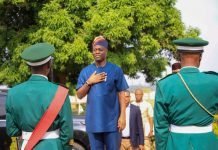