Speaking to journalist immediately he cast his vote, Fayose said that he is in charge of Ekiti with about 80% and by the grace of God his candidate will come out victorious after the election.

“Remember we raised all these issues. As I speak to you, they said they deployed 30, 000 policemen, military, paramilitary and all that but thugs are snatching ballot boxes everywhere. And what they call see and buy politics is thriving everywhere with the police and civil defense giving signs to people bearing the money so that they can pay the voters.

“It is my duty to vote and be responsible in voting, and that’s why I have stayed in my house and I’m going back now.

“But no matter what it is, I’m winning this election. There’s a difference between what I’m narrating and my capacity to win. On top of all these things they are doing, I will still win this election, because this state I’m in charge by 80% by the grace of God. I won the last election by 82, 000 votes, how do they recover from that 82, 000 even if they cut the heads of 82, 000 people, they can’t get far.

“I will still win this election. But beyond my winning, this country is in crisis. I wonder if a government came to power through popular vote, defeating an incumbent and conceded.

“All the security agencies are totally working for the APC. Beyond this, they gave about 64 hilux to to APC candidates and they deployed them to make arrest. And when you ask senior police officers, they say they are not aware. You saw what happened in front of the government house This is unfortunate for Nigeria.

“I raised all these alarms that this elections may be marred with violence, and that’s exactly what’s going on now. In almost all local government, PDP chieftains are being arrested. Council chairmen, house of assemblies members, majority of my people are being arrested. My chief of staff is in detention. He was arrested about an hour ago,” he said.

“We fight corruption, but wrong people in authority is the worse the thing that can happen to any nation. If this is the sample for 2019, I think it’s a lost ground and it’s a hopeless expectation. I want to say very expressly that the security agencies are enemies of Nigeria. They have taken over the election from INEC. The police authority refused to pick calls; we can’t reach any of them. The thugs are operating freely with cutlasses and guns everywhere. It is regrettable and sad.

“Card readers were not working in more than 50% of the places. In Efon-Alaaye, most card readers weren’t working. We have some units where they only accredited only 20 people. Where one voter spends up to about 40 minutes. Some didn’t have their fingers go through. I think INEC needs to be enhanced,” he said. 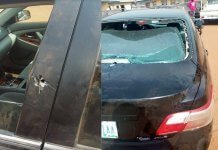