ONE month after the 14 July 2018 Governorship election in Ekiti State, Governor Peter Ayodele Fayose is still in denial. He has neither congratulated the acclaimed winner of the election, Dr. John Kayode Fayemi, who happened to be his predecessor in office and did not deny him the benefit of such honour in 2014, nor constituted a committee that will see to the smooth transition of power from him to the governor-elect, who will take over the mantle from him on 16 October 2018.

Voting in a new leader and ensuring a smooth transition from one leader to the next are two different but contiguous processes. Once an election is over and a winner emerges, the next thing to do is for both the outgoing and the incoming to merge their interests to become one, and that is to ensure a smooth transition of power from the former to the latter. Such transition of leadership is both a chance to say an appropriate goodbye and to offer a warm welcome. People will be watching to see how the incoming and outgoing would treat each other.

Ensuring a smooth and successful transition of leadership should therefore not be left to chance. A transition committee, made-up of a well-blended team of bureaucrats and political leaders should be charged with developing a transition plan and supporting its implementation. And, while there is no definitive answer to the question of exactly how long an outgoing should stay in office after announcing his imminent departure, passing the reins immediately has never been advocated. The consensus has been that an effective transition generally takes three months’ time.

No well-meaning leader would want to treat this very important process with levity, except a Fayose who keeps deluding himself and his followers who keep decreasing in number by the day. In their minds, something surreal would still happen that would truncate the handing over process, and so there is no need to set up a committee for the transition. On the other hand, some people are of the view that Fayose might rather be planning to have a conversation with his legs, that is, take a flight when transition becomes imminent. He would rather leave the handing-over to his hapless subordinates than to sink his over-bloated ego and act statesmanlike.

It is unfortunate that the outgoing governor is following this condemnable path. Flashback to 2014 when Fayose was declared winner of the same governorship election. The election then was held on Saturday 21 June. Fayose was declared winner in the wee hours of Sunday 22 June. Same Sunday, Fayemi, the sitting governor and candidate of the All Progressives Congress, APC in the election, was on air to congratulate Fayemi. Monday 23 June, Fayemi, the sitting governor, was also on hand to receive Fayose in the office of the governor as the Governor-Elect, despite the glaring arm-twisting tactics employed to win the election. Fayemi then assured Fayose that he would soon announce the composition of the transition committee after due consultation with the Governor-elect. And he did.

No sooner did Fayemi recognise Fayose as governor-elect, than the latter became power drunk as governor-elect and started drawing N10 million as monthly allowance for himself, effective from July 2014, being the following month after the election, till October when he eventually took over. As if that was not enough, Fayose travelled to Lagos to pick a N52 million worth Sport Utility Vehicle (SUV) as his official car as Governor-elect, within the same month of his declaration.

Having thus fortified himself as governor-elect, Fayose went ahead to constitute a nine-man Transition Committee for the smooth take off of his administration to team up with Fayemi’s also 10-man committee from the ruling APC and the incumbent later swore in the 19-member transition committee, comprising top functionaries of his administration and nominees of the (then) Governor-elect, Fayose, saddling them with the “responsibility of organising a hitch-free handing over and inauguration of a new government come October 16, 2014.”

The 2014 Transition Committee was led by the then Secretary to the State Government, Alhaji (Dr.) Ganiyu Owolabi. The terms of reference included organisation of the handing over and swearing-in-ceremony of Fayose as governor, preparation of a comprehensive list of all government assets and liabilities and interfacing with key MDAs on the programmes and projects of government.

In 2015, PDP’s Goodluck Jonathan, who also lost the presidential election to APC’s Mohammadu Buhari, inaugurated a 19-man transition committee, led by the then Secretary to the Government of the Federation, Senator Anyim Pius Anyim, saddled them with the development of “a clear framework for liaison with the out-going administration for purposes of a smooth handover and takeover and to receive hand-over documents from Ministries, Departments and Agencies with the aim of itemising the most important or most urgent issues confronting the in-coming government.”

It is in this same vein that Dr Kayode Fayemi who got elected as the Ekiti State Governor-elect last July had constituted a transition committee weeks ago. The committee, headed by Sen. Olubunmi Adetumbi, has been charged with the responsibility of interfacing with the present administration on the smooth handover of power on 16 October.  Fayose, as the sitting governor, is since being expected to follow suit without any delay, in the spirit of fair play.

This is the world best practice, and one critical reason for following this kind of path is with the belief that the incumbent possesses an accumulated wisdom, which is incredibly valuable during the transition, and that such kind of wisdom cannot be conveyed in a matter of mere days. The terms of reference of the transition committee are key to a smooth transfer of power. They should cover what the committee is supposed to do and cover, and what the cost should be.

Such a well-planned, well-coordinated transition programme will join the incumbent and incoming together in finding a comfortable way to let the incumbent step down as well as set a sensible guidelines for them to respect each other’s position. And rather than being left to the whims and caprices of a sitting governor or an incoming one, it should as a matter of fact be legislated through a decent Transition Act that would cover certain fundamentals and paying proper attention to the unique circumstances of the operating environment.

There are four over-arching functions of a transition committee: to make comprehensive practical arrangements to regulate transfer of political power, to ensure daily national security briefings for the elected leader, to ensure salaries allowances, privileges, or awards are paid (this could arguably deal with the rash of questionable last minute appointments, promotions and removals, which outgoing leaders succumb to) and to take any other functions which will enable the objective of such Act.

A transition act would also take care of who and who can be in the committee. In Kenya and Ghana, for example, their transition committees are legislated, and they include the ministers of finance, foreign affairs, interior and defense, the attorney general, and the secretary to the government. Kenya goes much further with the IG of Police, head of intelligence, the Clerk of the National Assembly, and the Chief Registrar to the Judiciary etc. and takes care to provide that two-thirds of the members of the committee can form a quorum.

Nigeria should therefore borrow from the Ghanaian Transition Act of 2012, which provides that within 24 hours after the declaration of the presidential election results, the President must activate the constitution of the transition committee with the appointment of designated officials of his administration. The president-elect can have an equal number of members and the first meeting of both teams – which now form the transition committee – must meet within 48 hours of the announcement of the results. This should also apply to the governor and governor-elect, respectfully.

If the terms of reference had been captured in a Transition Act, it is unlikely we would be having such impunity and deliberate scuttling of a necessary process as the one now oozing out from the Fayose closet. Already the incumbent governor has allegedly started padding expenses and doctoring the documents he is expected to hand over to the incoming governor, in order to create problems for the latter when he takes over. An incumbent who had not declared any internally generated revenue in the past four years, is now asking the local government council officers to start generating documents on how the IGR was disbursed and spent.

Russia: Vladimir Putin Sworn In As President For Fourth Term

Kogi 2019: The Delegates And The Fate Of Nigerian Democracy 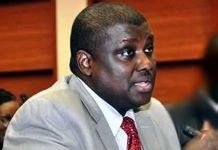