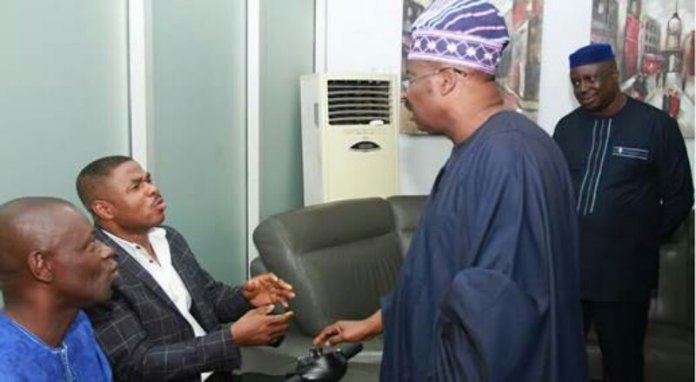 THE partial demolition of the Music House of the Gospel Juju Maestro and Chairman of Fresh FM, Yinka Ayefele, last Sunday by the Oyo State government sparked a public outcry. The building also houses the radio station of the musician, Fresh 109.5 FM.

In what appeared to be a bid to lay the case to rest, the state governor, Senator Abiola Ajimobi, set up a meeting with the singer, his younger brother and his publicist, David Ajiboye.

Ayefele, giving the details of the meeting through his publicist said it was the Oyo State government that asked for a meeting with the singer.

He said: “On Thursday, we were at a meeting organised by the Broadcasting Organisation of Nigeria at Golden Tulip when we got a call from one of the governorship aspirants in the state. He told us that the governor would like to see us. I was at the BON meeting with Yinka Ayefele and his younger brother. We felt that since they were the ones that invited us, we should honour the governor’s call; so we excused ourselves from the BON meeting and went to the governor’s office.

“We got there at about 12noon but the governor did not get to his office till about 4 pm. We did not leave the governor’s office until about 7 pm. I was at the meeting with Yinka Ayefele and his younger brother,” he said.

Ajiboye noted that though they insisted on having a closed-door meeting with the governor, they were shocked when pictures of the singer and the governor surfaced on Twitter a few minutes into the meeting.

ALSO READ:  The Secret Of My Success - Seyi Makinde

“When the governor came into the office, we all prostrated to greet him being that he is older than us and we told them that we did not want cameras. We wanted a closed-door meeting with the governor so he asked the pressmen to excuse us but his private photographer did not leave the room. We noticed that while we were talking with the governor, the photographer was taking our pictures and uploading them on their twitter handle immediately.

“The governor later invited his team to come and join us in the meeting; his team comprised the commissioner for information, a governorship aspirant in the state and about four special assistants.

“The governor told us his grievances. He told us that he could have saved the situation if only we had come to see him. He felt we ought to have come to beg him and our chairman, Yinka Ayefele, pointed it out that we had since told the commissioner for information to book an appointment with the governor.

“He further said that he called the SSG to help him book an appointment with the governor even before this incident happened and the commissioner corroborated his claims but said that the governor was unavailable at the time,” Ajiboye said.

“Coincidentally, there were about ten monarchs who were also waiting to see the governor as at the time we were waiting for him. They were led by the Alaafin of Oyo; so when the Obas saw Ayefele, they decided to rally round him.

“After they had met with the governor, they came back to meet Ayefele and possibly plead on his behalf to the governor. That was when they allowed the cameramen to enter and we felt it was more or less a set-up because we wanted a closed-door meeting. We did not want cameras but there was nothing we could do because we were at the governor’s office.

“The monarchs appealed to the governor to help Ayefele rebuild the music house. After the monarchs left, the governor also left us with his team and told us to iron things out with them.

“They claimed that they wrote several letters to us but that we ignored them, they went ahead to say that we did not have a Certificate of Occupancy for the building but we showed them all the proof.

ALSO READ: The Incessant Attacks On The Media By The Executives

“They all agreed, except one commissioner, who said that we have to do damage control because we have dented his personality and that of Oyo State government. We had to tell him that it was beyond us because we did not ask people to abuse their government. If they had not demolished the Music House, people would not lay curses on the government. That was what happened at the meeting.