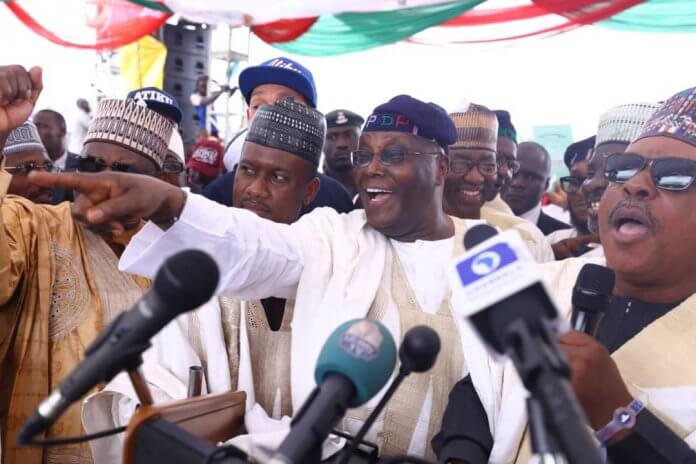 The PDP Presidential Campaign Organization declares that President Muhammadu Buhari no longer has the moral standing to seek re-election until he directly answers its Presidential candidate, Atiku Abubakar, on the revelation that the President has soiled his hands in the alleged corrupt acquisition of Etisalat Nigeria and Keystone Bank PLC.

This was contained in a release signed by Kola Ologbondiyan, Director, Media & Publicity
PDP Presidential Campaign Organization, and made available to ReportersAtLarge.

The PPCO insists that President Buhari should perish the thought of going ahead with his re-election campaign without clearing this pertinent issue because it directly bothers on his integrity both as a person and the exalted office of the President of the Federal Republic of Nigeria.

The PDP Presidential Campaign challenged President Buhari to explain how his family members came about the sum of N1.032 trillion for this scandalous acquisition.

“Nigerians are not interested in mere rhetoric or attempts by the Buhari Presidency to divert public attention from the issue at hand, but demand that President Buhari, who hitherto prides himself as Mr. Integrity, squarely addresses these grave issues in person.

“This is not an issue for President Buhari’s aides to howl about in the media, it touches directly on his person, particularly his perception as a symbol of the Talakawas. He must, therefore, address them on this issue.

“It is a norm that he who comes to equity must come with clean hands. President Buhari and his family members have entangled themselves in corruption. Mr. President’s hands can no longer be said to be clean, until he proves otherwise.

“The PPCO wants Nigerians and the whole world to note that President Buhari’s refusal to personally address this matter means consent.

“We, therefore, dare President Buhari to put forth a denial on this disclosure by our candidate and we will spare no thoughts in furnishing the public with details of his corrupt activities within and outside Nigeria.

“Our party has full details of how persons related to President Buhari, by consanguinity and affinity, have been paved the way to loot trillions of naira from government agencies for corrupt acquisition of shares in major companies, purchase expensive property within and outside Nigeria, as well as to finance their very luxury lifestyles, under Mr. President’s cover.

“In fact, no Nigerian has made more money in the last three and half years than relations of President Buhari, many of whom have found themselves controlling stupendous wealth frittered from our economy, yet our President is asking Nigerians to get ready for more hardship in the coming year.

“Furthermore, our party is privy to the facts of how these relations of the President have been hounding government agencies, major business concerns and intending foreign investors over kickbacks as well as strangulating companies that refuse to accede to their demands.

“Nigerians will also recall how the Buhari Presidency muted the case of the Aide of the First Lady, Mr. Baba-Inna, who was arrested in September this year, over accusations of receiving N2.5 billion from politicians, businessmen and women on behalf of the First Lady.

Nigerians can also recall how the Buhari Presidency gagged the confession of one Amina Mohammed, paraded by the Department of State Services (DSS), who stated in public that persons close to President Muhammadu Buhari were involved in serial fraud and looting of public resources under the official cover of the Buhari Presidency.

“In fact, there is incontrovertible evidence, as provided by the Governor of Kaduna state, Mallam Nasir el-Rufai, that President Buhari is not as clean as his handlers want Nigerians to believe.

“In October 4, 2010, el-Rufai accused Buhari of corruption in allowing 53 suitcases belonging to his ADC’s father to enter Nigeria unchecked at a time the country was exchanging old currency for new in 1984.

“President Buhari should therefore not continue to dress in borrowed garb of integrity until he cleans himself of the stinking corruption of his acolytes, family and friends under his cover.”

WHO Declares Emergency As Ebola Outbreak In DRC Spreads

Any Bank That Deducts Monies Illegally From Customers Must Repay With...