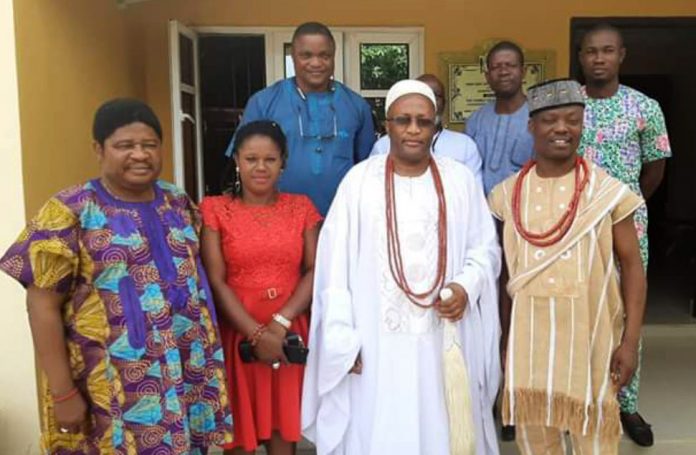 The Chairman Ekiti State Council for Traditional Rulers, Oba Adebanji Ajibade Alabi has described the resuscitation of Ekiti State Festival for Arts and Culture (EKIFEST) by Governor John Kayode Fayemi as an act of saving this generation from the contempt of generation next.

In the same vein, the State Commissioner for Youths and Sports Development, Mr Michael Awopetu said that EKIFEST would be a platform for cultural re-armament and tool for socio-behavioural re-engineering of our youths.

Oba Alabi and Commissioner Awopetu made these observations in a separate forum while hosting some members of EKIFEST 2019 Steering Committee led by Professor Rasaki Ojo–Bakare, Festival Consultant, which includes Ambassador Wale Ojo-Lanre, Director–General, Ekiti State Council for Arts and Culture, Mr Banji Adelusi, Director of Culture and Prince Caleb Osasona, Chairman, Network for Ekiti State Creative Artists (NECA), and others in their respective base.

Oba Alabi, a diplomat by career who had served Nigeria in Jamaica and the Caribbean before mounting the stool promised to support the Committee for a successful festival said that the desire to host EKIFEST by the state government is a genuine desire by the government to stoke the economics of the state via cultural–tourism initiative.

He pointed out that the cultural festival celebration is a multi-dollar revenue spinner which countries like Jamaica, The Gambia, India, Brazil, have explored to boost their economies and which Ekiti – State government must tap early and enhance spiritedly

Oba Alabi reaffirmed his commitment to the success of EKIFEST 2019 adding that obas in Ekiti would support the event with everything legally possible as “apart from showcasing our heritage , it will also boost the economy of the state “

He applauded the efforts of the Director-General of the Ekiti State Council for Arts and Culture, Ambassador Wale Ojo Lanre at branding the arts and culture sector in Ekiti State.

Oba Alabi said that “the selection of Prof Ojo Bakare as the Festival Consultant is apt, prim, fit and appropriate. I remember that this Prof from Ekiti State was the one hired by the Federal Government of Nigeria to train Nigerians in Diaspora Jamaica on cultural etiquette and values when I was still in the diplomatic service in Jamaica .”

“I have complete confidence and trust that the duo of Ambassador Wale Ojo Lanre and Professor Rasaki Ojo Bakare , who I have worked within Jamaica will package the best EKIFEST for the State “

Reinforcing Oba Alabi’s view, the Ekiti State Commissioner for Youths and Sports Development, Mr Awopetu disclosed that EKIFEST 2019 would be used as a platform to forge cultural altruism among the youths

He revealed “Our youths are caught in the web of cultural confusion due to globalisation, religious indoctrination and colonial infiltrations. An event such as EKIFEST is a potent platform where cultural rejuvenation and revival can be endeared to our youth. It is on this note that my Ministry will not only support this festival but will go many miles at mobilizing the youths to actively participate in all the programmes “

King Femi Ariyo, one of the music icons in Ekiti who was surprised by the visit of the Committee members to his house in Ilawe said that “Governor Fayemi is a surprise. I am short of words but what I can tell you people is that Governor Fayemi is God sent, he is doing what nobody expects in the arts and culture sector. Imagine his Committee led by the first Professor of Dance in Africa and Ambassador Wale Ojo Lanre and others counting me worthy of a visit. Look, EKIFEST is a success “

In summary, Prof Ojo Bakare canvassed for the unflinching support for EKIFEST and revealed that EKIFEST 2019 is a cultural migration from dance, entertainment and fun to empowerment and economic development which all Ekiti must witness.

Meningitis: We Recorded Over 1,000 Cases In Sokoto —Tambuwal