A man in his twenties, Semiloore Sanni has raised alarm over continual threat to the life of his family members in Ibadan, the Oyo State capital.

Sanni, while speaking with ReportersAtLarge narrated how some thugs whom his dad; gbolahan Sanni had an encounter with over four plots of land situated in Soka area of Ibadan in 2018 has continued to threaten him and the rest of the family over the issue.

He disclosed that the same case which had already claimed the the life of two stake participants had led to his dad, Gbolahan Sanni relocating to Canada for safety after he was continually threatened by the so called thugs in 2018.

Despite the fact that his dad, who the thugs were after, had fled to Canada for safety, the thugs have continued to occasionally badge into the house to check if his dad was back from his trip as well as asking about when he intends to come back.

Mrs Opeyemi Sanni; mother of Semilore Sanni, in her response said that she is fed up of strange, fierce-looking-men occassionally badging into thier house to ask for her and demanding to know when her husband will be back from his canada trip.

All efforts to get Mr Gbolahan Sanni on phone to ask for his own side of the story proved abortive as he was not picking up his calls. 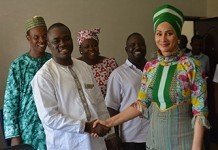 2019: Buhari To Address Nigerians On Re-Election

Breaking: No Law Requires Me To Tender My Certificates, Buhari Tells...