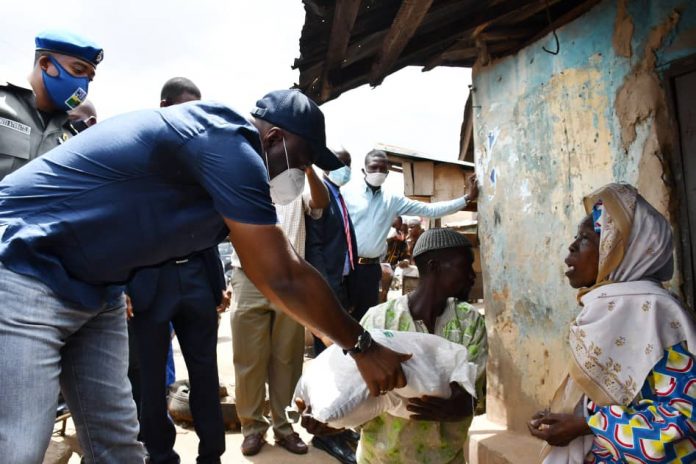 Oyo State governor, Engineer Seyi Makinde, on Wednesday, continued the distribution of palliatives to poorest of the poor in Ibadan metropolis, promising that the state government would equally provide some palliatives to 10,000 farmers to aid food security.

Governor Makinde, who conducted a symbolic distribution to households in Oke Ado, Foko, Oja-Oba and Oranyan areas within the metropolis, noted that the government would continue to support the vulnerable.

A statement signed by the Chief Press Secretary to Governor Makinde, Mr. Taiwo Adisa, said the effort was in continuation of the distribution of palliatives to 90,000 households earlier kickstarted in Ibarapa zone.

The statement quoted the Executive Adviser to the governor on Agribusiness, Dr. Debo Akande, as saying that the distribution of palliatives in Ibadan marked the final stage of the first batch of the exedrcise.

He said: “For the first phase of the distribution, we started in Ibarapa and we have done many local governments and regions including Ogbomoso, Oyo, Oke-Ogun and this is the time to finalise the first batch of the distribution in the state. As we are all aware that Ibadan alone has the highest number of local governments and that shows the significance of what is done today.

“And, of course, if the governor started the distribution, there also has to be a final handing over of these palliatives to the people as well. So, that was exactly what happened today.

“I am aware that we will evaluate what we have done in the first phase. We understand how far we have gone, the impact it has made and this will guide our decision in terms of the distribution for the second one.

“This is a government that is data-driven. We want to understand where our strength lies, what we have learnt and, on the basis of that, I can assure you that from the feedback we have gotten from the analysis we have done so far has shown that this is a systematic approach of distribution of food to the right set of people, which we have their data.”

Akande maintained that with the conclusion of the Ibadan end of the palliatives, the government has provided support to 90,000 households across board, adding that the state will equally embark on the distribution of palliatives to 30,000 vulnerables and special interests in the society.

“Currently, we have done 90,000 households across board. We have another 30,000 which we will be doing afterwards and then we will be looking at what we have as resources to continue the batches of distribution as it were.

“The palliative measure is in two ways. The first is to distribute food, which we have done and will continue to do. The second one is equally germane as well and that is focused on the support for food security within the state.

“What His Excellency has done with several analysis and support from scientists and specialists in this area is that we will be supporting close to 10,000 farmers across the state with different kind of agricultural inputs, and that will be happening within the next one or two weeks to support this planting season.”

Our Generation Has Failed Nigerians ― Obasanjo