As the sleep of those concerned in the affairs of the country’s resources and powers is murdered with the demonstrations of the youths, different demands have been made for the government after the eradication of Special Anti Robbery Squad (SARS) including the reformation of the police force.

In this light, Para Nation, a youth oriented group with visions and mission to serve as a voice for the majority, has come out again, to tell the government that the peaceful protest has not ended after the government yielded to the immediate demands.

According to the one of the founding members, Olamide Ishola, who rubbed minds with Team Report Africa during early hours of today, “this is not just about the police, the brutalities, de-humanization and exploitations of people”. 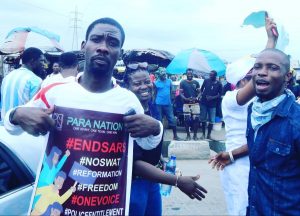 He continued, “Nigeria has a long history of sufferings and insecurities that the post-colonial Nigerian government has subjected the citizens to”.

He also said “The #EndSARS protest reflects the annoyance, bitterness and sorrows of an average Nigeria. The government should try and make proper reforms to better the lives of the citizens. The protest is not a joke”.

“Drastic reformation is highly needed, a kind that will have a positive effect on every citizen irrespective of class, gender and race”, he concluded.

The National Coordinator of Para Nation, Adeniji Kayode, said: “the country has turned to a mess as the treatment of the citizens in the hands of the security officials has rubbished the pride and ego of its citizens”.

“On this ground of protest, championing the agitation to end police brutality, the government has failed to recognize the fact that unemployment, hunger and poverty are first-class brutalities. How does an unemployed father look to the face of his hungry child and have peace of mind?”, he lamented.

“This protest is a clarion call to ignite the consciousness of the government about the plight of the citizens. We need a government that is ready to have our interest at heart.”, he concluded.

In the same light, Wale Shotunde, the National Secretary of Para Nation, said: “This protest must remain peaceful across the country because we are not just telling the government but the foreign communities that we are ever responsible, mature and well-coordinated”.

He also noted that Para Nation came to existence to answer so many calls but the call to respect humanity is the core aim of the organisation. It is time to also tell the world that every man should be treated with a great measure of respect.

“This protest came as a result of unethical behaviours of some selected police officers but now the protest is demanding answers from questions that resulted to so many unethical conducts of our leaders ranging from politics, health, commerce, education to other sectors of the country”.

“The youth are simply asking for their rights concerning the security of life, property, future and well-being. We are not running aboard for a better lifestyle because we have decided to make Nigeria our home, where our children should not need to stand up for protest demanding good life”, he concluded.

Lekki Toll Gate Shooting: Tinubu Reacts, Says I Will Never Be Part Of Any Carnage