How Makinde Snatched Victory At PDP Congress With ‘N2.5b, All The Thugs In Oyo State…’ -Fayose Reveals

Isaac Fayose, one of the brothers of the former Governor of Ekiti State, Ayo Fayose has released the details on what gave victory to the camp of the Oyo State Governor, Engr Seyi Makinde at the just concluded Peoples Democratic Party (PDP) Southwest Congress.

Amb. Arapaja scored 343 votes to emerge the winner at the PDP South-west delegates congress held on Monday in Osogbo. He defeated his rival, Eddy Olafeso, who scored 330 votes during the election. Olafeso is the immediate past national vice-chairman (south-west) and candidate of former Ekiti governor, Ayo Fayose.

It is also on record that 675 votes were cast out of which 10 were voided.

According to Papermacheonline’s report in a chat monitored on popular WhatsApp Group, Friends Of Parrots‘, Isaac Fayose alleged Governor Seyi Makinde coasted to victory after spending N2.5 billion and putting to work all the thugs in Oyo State to defeat the Fayose/Eddy Olafeso camp in a tight race Taofeek Arapaja won with just 13 votes to become the Deputy National Chairman of the PDP in the Southwest.

His claims attracted reactions from aides of Governor Seyi Makinde who were also in the group. They challenged the younger Fayose to give life to his allegations and be quiet.

Meanwhile, before the beginning of the tense elections, former Governor Fayose has declared that the governor of Oyo State, who is also the only governor of the People’s Democratic Party (PDP) in the South-West geo-political zone, ‘Seyi Makinde, is the father and leader of the party in the zone.

In a statement on Monday, the Special Assistant (Print Media) to Governor Makinde, Moses Alao, said that Fayose, while addressing the delegates at the WOCDIF Centre, Osogbo venue of the South-West PDP Zonal Congress, had said that supporters should not be allowed to drive a wedge between the leaders, adding that he would readily accept the leadership of Ambassador Taofeek Arapaja if he wins the election.

He further declared the process as a family affair of the PDP, while Governor Makinde added that the outcome of congress would be accepted in the spirit of a family contest, whatever it is.

Makinde maintained that the Congress was an attempt to reposition the South-West PDP, though there were ramifications for the party nationally.

According to him, “this is an attempt to reposition our party in the South-West. But it has ramifications for our party nationally.

“So, whatever the outcome is, we will take it in the spirit of a family contest. We don’t want to defeat ourselves, but APC. So, at the end of this exercise, I promise you that there will be no victor and no vanquished.

“As your only governor in this zone, whoever emerges belongs to me and I will work with the team to reposition our party in the South-West.

“So, let me thank you ahead for a peaceful and orderly conduct,” Governor Makinde said.

In his speech, shortly before the commencement of the congress, Fayose publicly accepted Makinde’s leadership of the PDP in the zone, adding that the governor had been making an impact in Oyo State and that he would not fail. 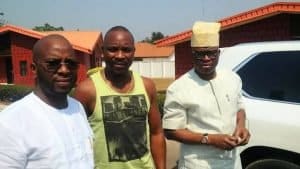 He said: “Thank you for the endurance and tolerance we have all gone through. The issue of this congress is a circumstantial one, which is still in the public domain. Who is the leader? Governor Seyi Makinde is our leader.

“Therefore, we should not allow, particularly those who are our supporters and lovers, to continue to put a wedge between us.

“Our leaders – Governors Oyinlola, Oni, former Deputy Senate Majority Whip and all serving senators – I want to assure you that we will make exploits together because this must not divide us.

“I stand here to tell you today that either way it goes, I will accept it. Therefore, if Arapaja becomes chairman, I will be the first to visit him in Ibadan, because there is nothing that will last forever.

“Nobody has offended me and if I have offended anybody, I sincerely apologise. Don’t let them give us the name we do not bear in Yorubaland.

“I want to say again that Governor Seyi Makinde has made an impact in Oyo State and he won’t fail. Seyi Makinde and I are one. No matter what, he is our father and may God continue to do wonders through him.”

Recall that there were reports of palpable tension at the venue of the Zonal Congress of the PDP in Osogbo Monday evening, following sporadic shooting reportedly by the police to disperse suspected hoodlums at the entrance to the venue.

Some suspected hoodlums at the entrance to the venue were heard calling the name of the former Ekiti State governor, threatening to deal with him.

The incident, which coincided with the period when the vehicle conveying Fayose was leaving the venue, caused panic as security men shot into the air to disperse the hoodlums.

Man Beats His Six-Month-Pregnant Wife To Coma, Storms Hospital To Unplug Oxygen Mask Until She Died

Man Beats His Six-Month-Pregnant Wife To Coma, Storms Hospital To Unplug Oxygen Mask Until She Died

Father Mbaka Drops New Prophecies, Reveals What Will Happen to Buhari Govt If…

Why There’s Delay In Recovery Of £4.2m Ibori Loot From UK, Malami Explains