It was the dawn of a new day for Ifeoluwa and Ayotomiwa. It was a day of happy union and new beginning when God’s matriculation of 1+1=1 (The Divine Mystery which no man can unveil), for the love birds.

All was set at Molete Baptist Church, Challenge, Idi-Odo, Ibadan, earlier than expected with the presence of people in their best element eagerly waiting for the commencement of the ceremony at 10:00am.

Then came the sudden change in atmosphere as royalty filled the sky thereby radiating an earth colour purple. Right on the Red Carpet sat 2 young men. One at the front and the other at the back. Then an announcement came over the public address system in a calm manner that, “We commence this service as the bride marches in.” Then sounded the brigade drum breaking into slow march as the choir sings, “To God be the Glory”. As the congregation took the last stanza, the groom in a humble manner walked down the aisle, greeted his father-in-law whom in return handed over the bride to him and walked the bride in a glamorous manner to her seat. 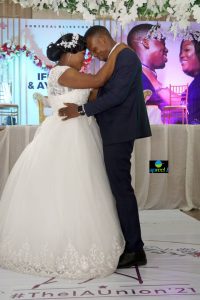 Events quickly unfolded with the priest clad in a white episcopal gown whispering to the bride and groom who in return gave happy smile. Following this was the exchange of consent for marriage as the priest asked, “who gives Ifeoluwa Olawumi to be married to Ayotomiwa Yinka?” The Father and Mother-in-law, Deacon and Mrs Oluwayemi majestically came out and handed the bride unto the priest who then took the bride by the hand in order to give her to the groom.

Then came the exchange of marital vow and sermon by Rev. Kehinde Edward Alabi. The clergyman advised the new couple to be tolerant of each other, be focused and should not allow intruder into their marriage because the Bible says, what God has join together let no man put asunder.

Reception then followed immediately at Kakanfo Inn, Joyce B Road, Ibadan with the opening prayer said by Pastor Seyi Kayode.
The hall was filled to the brim by the cream-de-la-cream of the society present and was Chaired by Bar. Kunle Faokanla. He advised the couple to trust themselves, not allow any intruder in their relationship, love themselves, do everything together and live in peace.

The cutting of the cake was supervised by the Master of Ceremony, Rotimi Johnson.

The MC, Rotim Johnson, Taiwo Olusanya a.k.a. Obama and Back 2 Back MC did wonderfully well while the musician Yinka James a.k.a. Adonai, dazzled guests at the event.

The event was covered and ushered by Apreel 1 Events Management while T.V. Event was packaged by Zaphyrs.

Which Is Your Town? See Oriki Of All Town In Ekiti

Which Is Your Town? See Oriki Of All Town In Ekiti

We Know Where Kidnappers Are, Only Being Careful – Lai Mohammed

What Pastor Adeboye Said As His Son Is Buried