Community Appeals To Oyo Governor Over Illegal Encroachment On Land

Residents of Orisumbare community in Oluyole local government of Oyo State, on Thursday appealed to the state governor, Engr. Seyi Makinde for his urgent intervention over illegal encroachment of their lands by officials of the state government.

The community stated that most of the lands are farmlands which served as their means of livelihood, adding that they have no where to go if their lands were taken by the government and houses on the land were also demolished.

Speaking on behalf of the affected residents, Mr. Adetunji Adekunle said that the state government had earlier acquired some land in the area for trailer park during the administration of former governor Lamidi Adeshina, which the people believed its for the development of the area.

Adekunle lamented that the developer employed by the present state government is now trespassing beyond the boundary of the land earlier acquired by government, adding that their farmlands has been destroyed by tractors and some of their houses on the land were also marked for demolition. 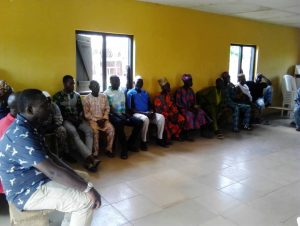 He said, “We agreed to give out the acquired land because we believed its for the development of our area, and there was no rancor then, but to our surprise, we were later told during the tenure of former governor Abiola Ajimobi that government has taken over all the lands in the area.

“We think engaging government in legal battle might not brings fruitful result, that is why we are appealing to the government to release our land before it leads to kios between us and the government officials.”

He however called on the state government to as a matter of urgency wade into the situation before it degenerates and gets out of hand.

One of the affected residents, Mr Lukman Salau said that the people can not afford to let out the inheritance of their forefathers, saying that government should not kill them but have mercy on them.

“We have nowhere to go if our land is taken and our houses are been demolished, our forefathers have been here for long, so we are not to gives out our inheritance.”

“Over 300 acres of land was acquired for trailer park by Lam Adeshina government, but now, the land trespassed on is over 40 acres and more than 40 farmers where also affected, also, 60 houses were marked for demolition, and 10 families were affected.”

Coy, Others Dragged To EFCC Over Alleged N16.5m Contract Fraud

Coy, Others Dragged To EFCC Over Alleged N16.5m Contract Fraud