A military jet hunting kidnappers in northern Nigeria has been shot down by criminal gangs but the pilot survived the crash, the Chief of Defence Staff, General Lucky Irabor has confirmed.

Irabor, who spoke in Kaduna on Monday at an interactive session with senior and junior officers from the North West, did not give details, said the pilot was flown to an undisclosed hospital.

Meanwhile, Director of Public Relations and Information, Nigerian Air Force, Edward Gabkwet, an Air Commodore, explained in a statement on Monday that on 18 July 2021, at about 12.45 pm, a Nigerian Air Force (NAF) Alpha Jet aircraft, returning from a successful air interdiction mission between the boundaries of Zamfara and Kaduna State, came under intense enemy fire which led to its crash in Zamfara State. 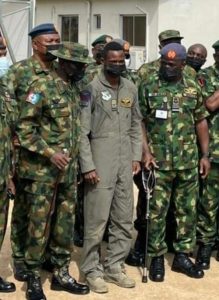 Armed gangs – referred to locally as “bandits” – have been blamed for a spate of recent kidnappings in this part of north-western Nigeria.

Students and schoolchildren have been especially targeted – more than 1,000 have been kidnapped since December. Most have since been freed, reportedly after ransoms were paid, but some have been killed.

In recent days, President Muhammadu Buhari has directed the military to do all it takes to flush out criminal elements in the states of Katsina, Zamfara and Kaduna.

The Nigerian Air Force said it had mounted intensive day and night air operations against the bandits and their hideouts, especially in these three states, in collaboration with ground forces. It was in one of the operations that the fighter jet was brought down on Sunday.

“Through these intensive air operations, hundreds of bandits have been neutralised and several of their hideouts destroyed,” the Nigerian Air Force said in a statement.

While there have been several military planes crashes this year, this is the first reported case of armed gangs downing one.

There was a shock in May in Nigeria when the Army chief, Lt Gen Ibrahim Attahiru, was killed in a plane crash alongside 10 other officers.

Back in April, another Alpha Jet crashed in Borno state – one of the areas where Boko Haram militants are most active. Reports that it was shot down by the jihadists have been denied by the military.

Before that in February, a military aircraft in Abuja that was bound for Niger state to search for kidnapped schoolchildren there crashed – killing all seven people on board.