AS the result of the claims of unlawful arrest, the Economic and Financial Crimes Commission (EFCC), on Thursday, faulted claims of the cousin of former President Goodluck Jonathan, Azibaola Robert, that he is being pressurised by the agency to implicate the ex-president in the alleged diversion of $40 million.

The agency, in a counter affidavit opposing the suit filed by Robert before the Federal High Court, Lagos, seeking for an order of the court to release him from the custody of the commission, revealed why the suspect was still in their detention.

The anti-graft agency also denied any plot to implicate Jonathan in the alleged fraud that his cousin is being investigated for.

Robert is currently under investigation over an alleged diversion of $40 million through One-Plus Holdings and a sister company, Kakatar Con­struction Limited. 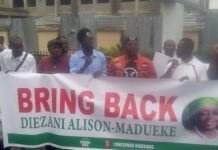