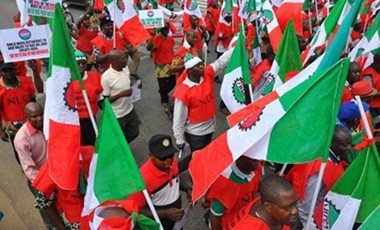 THE Joe Ajaero-led faction of the Nigerian Labour Congress (NLC) and the Nigeria Union of Petroleum and Natural Gas Workers (NUPENG) on Friday said they refused to join the nationwide strike called by the Ayuba Wabba-led NLC because the Federal Government responded to their demand to convene a meeting with stakeholders.

At a press conference in Lagos addressed by Ajaero and NUPENG President Achese Igwe, the labour leaders said strike would have been the last option if talks with the government had failed.

Ajaero said his faction of the NLC held productive talks with the government, including the agreement to set up a panel on palliatives to cushion the effect of the petrol price increase.

According to him, both factions of the NLC could have worked together on the strike, but, according to him, the Wabba faction walked out of a meeting with the government, insisting that the Ajaero faction must not be part of it.

“If not for the unfortunate incident that happened that day, maybe we would have been together. Maybe it’s an ego thing,” Ajaero said.

Besides, he said before a strike action is declared, a 21-day ultimatum ought to be given, not three days.

He called for transparency in the management of the palliatives, saying the refineries should be fixed or new ones built while more jobs must be created.

He said: “The whole essence of negotiation is to implement a workable agreement. Then when the agreement fails, there are other options.

“I will not lead a strike that will not enjoy mass support. We need to differentiate between strike and protests.

“How can strike be called and road workers, banks and others are open? We’ll be making a mockery of ourselves.

“A leader should weigh the mood of members before declaring a strike. It amounts to industrial suicide to call a strike and your members ignore you.

“Such leadership should resign.”

Igwe said as a way of cushioning the effect of the pump price increase, states should endeavour to clear their salary arrears while negotiation for minimum wage increase continues.

“We said we expected the government to engage us, and they did. The era of impunity is over, so the palliatives must be transparent,” he said.

Both union leaders called for urgent inauguration of the Petroleum Products Pricing Regulatory Agency (PPRA) board, which would include representatives of labour unions.

On reconciliation of the two warning NLC factions, Ajaero said: “Nobody has bothered to investigate the election (which caused the division). NLC’s rules were violated and that has not been addressed.

“Reconciliation is not working because the board mediating between the parties does not have the bite to enforce resolutions reached.

“At every point in time, we have subjected ourselves to reconciliation. But the people involved are not ready to concede. So how is it going to work?”

Igwe, who doubles as the vice-president of Ajaero-led NLC, said the affiliate unions within the NLC must “sit down and talk” so as to put their house in order.