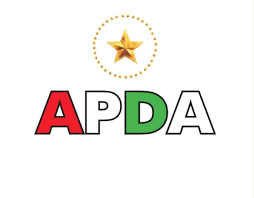 ADVANCED Peoples Democratic Alliance (APDA) has urged Nigerians to dicontinuance the claims that the party is in “merger talks” with SDP. fabricated lies because APDA is not aware of and not interested in the purported “merger talks” with other political parties, not excluding the revived Social Democratic Party (SDP).

The party said this in a release, signed by its National Publicity Secretary, Tosin Adeyanju, and made available to ReportersAtLarge.

The release reads: “In the craft world of politics, it is not rude shock to Advanced Peoples Democratic Alliance (APDA) that sources alien to the Party are crafting in their clandestine domains and wild imaginations of “merger talks” by APDA with other political parties, not excluding the revived Social Democratic Party (SDP).

“It is not lost on APDA that some persons with their consorts who continue to nurse hidden but illicit interests in APDA, as bargaining foil for their nothing but egotistical agenda for leadership of the SDP are masterminds of the purported “merger talks.”

“APDA categorically declares to the world that the craftsmen with their supporting cast of the “merger talks” are engaging themselves in strategic tacit deception, to hoodwink the public against the Party by the alleged “merger talks,” they are declaring to Nigerians they have no credible packages to offer.

“We want to urge Nigerians to dicontinuance this fabricated lies because APDA is not aware of and not interested in the purported “merger talks” with the SDP.

“We call on the general public and our teeming members across the country to discontinuance such rumor as we strive to feature in all elective position in 2019.

“The party is doing everything possible to come up with a credible candidates that will fly the parties flag in the Ekiti and Osun gubernatorial elections later this year.”