A former chairman of the Independent National Electoral Commission (INEC), Attahiru Jega, has accused members of the National Assembly of seeking for bribes to carry out their constitutional duties.

Speaking while delivering the year’s Democracy Day Lecture at the International Conference Centre, Abuja, on Monday, Jega said he has “spoken to quite a number of chief executives who complained of high demand for bribes from members of the National Assembly in the name of so called oversight functions.”

The former INEC chairman told the gathering, including President Muhammadu Buhari, Senate President Bukola Saraki, Speaker Yakubu Dogara, Chief Justice of Nigeria, Walter Onnoghen and other top government personalities that “some chairmen of committees at the National Assembly are notorious for seeking for bribes.” 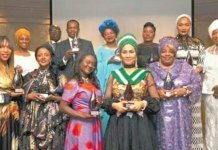