ANOTHER moment has dawn on us. The moment to decide the future of Osun State. Either good or bad, that choice lies on our very thumbs. Whichever way we swings it, the effect(s) would bear social and economic impacts on everyone.

Just as it is the norm in our political process, Osun people will go to the poll on September 22 to decide who leads the state for another four years. With their thumbs, they would make a choice and the outcome of the election will depict the projection of the people for the future; either for the restoration of Osun or fancy of their stomachs.

I’m particular about the fancy of stomachs due to the depressing culture of vote-buying that is shamelessly deployed to influence electorates. It is disturbing that the plight of the people have become a tool perpetuate their oppressors in power. That is a narrative the people must rise up to reject.

Disturbingly, those who cornered our resources for their private uses, have shown insatiable quest for their greediness. Rather than be remorseful and sought the people apology for failing them in rendering the expected service when they were entrusted with leading the state, they are either scheming themselves or trying to foist another error on the state, to maintain their lust for raking our collective wealths.

They mocked the people situation by doling out cash every election period to influence their choice. It is an evil they sought to normalise but with our firm resolves, we can resist them.

Osun is in shamble and struggling to survive the damages of the past. Recurring leadership failures have left the state in a precarious situation and salvaging the sordid outlook of both economic and social imbalance that plagued the state requires firm resolves and patriotic postures.

Casting the ballot is a civic right that should not be influenced by enticement. Whenever electorates surrendered their mandate for token, it implies their complicit in the misgovernance that plagued our society. They should blame themselves for the horrendous plights that the ruling elites melts on them.

So, it is time we discontinue our mistakes and ignore every deceits that orchestrated the disappointments and regrets of the past. Our votes should preface a promising tomorrow, not compound our woes. It should halt the uninspiring outlook in our dear state, not prolong our harrowings.

That is the essence of democracy. That was why our founding-father fought for democracy because they were convinced that it allows us the choice to determine our future. Within our thumbs lies our faith and that of our society.

As such, we must brace up and take a firm decision to correct the anomalies of the past. We should outsmart our oppressors by choosing our collective comforts and growths to their selfish attempt to further subjugate us. We should reject fancy of stomachs and let our votes reflect our consciences.

We should rise up to the defence of Osun state and ignore advances to lure our votes with token in order to continue the pillaging of our collective wealth by only few individuals. No matter the situation, we should never succumb to selling our votes.

It is the power we have to effect a better society and we must make our oppressors understand that we want a prosperous Osun where our stomachs will be filled without restraint all day and not the deceits of a cup of rise that can not satisfy us for a single day.

Our democracy is at the edge and we must not let it slide. Vote-buying is anti-democratic, but as it is with almost every other illicit acts, it flourishes when their willing accomplice. Either knowingly or unknowingly, the lust for money has aided the shameless culture of monetising votes. It must stop because our future hangs in the balance. 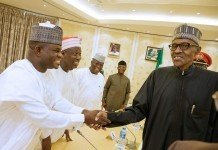 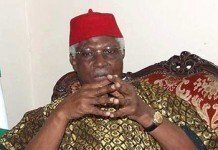 2019: Ekwueme Urges PDP To Resuscitate Internal Democracy In The Party

Makinde, Appeal Court And The ‘Axis Of Evil’ | By Taiwo...