TUOYO has become the fifth housemate to be evicted from the show while Seyi and Tacha faced fake eviction in the ongoing BBNaija reality show.

Tuoyo’s eviction was announced during the live show on Sunday following Avala, Isilomo, Ella and Kim Oprah who were previously evicted.

The physiotherapist was known on the show for his dance moves, bubbly personality in the house and his off-on relationship with Diane.

While on stage with Ebuka Obi-Uchendu, Tuoyo was shocked that he was nominated by Frodd with whom he had formed a bond in the house.

He revealed that he would continue this fitness and modelling career, capitalising on the fame he had gathered in the show.

Earlier, Ebuka had announced the fake eviction of Seyi Awolowo and Tacha. The housemates, however, were unaware that the evictions were fake.

Seyi was fake evicted by Biggie to teach a ‘lesson’ for refusing to use the Veto power of chance card he won a week before.

On Monday, he was nominated alongside Mike, Tuoyo, Seyi, Tacha and Frood.

He, however, refused to save himself with the card which cost him the card. Biggie went on to ban him from owning the power of chance card until the show ends.

Tacha was also fake evicted due to constantly commenting that she had followers who will keep her in the house till the last day.

The remaining housemates, who were still shocked from the eviction, continue to battle for the Grand Prize worth 60 million Naira.

ALSO READ:  Ekiti 2018: Still On Why Fayemi Should Not Run
Advertisement
Loading... 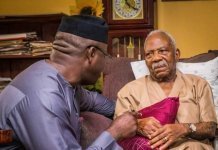